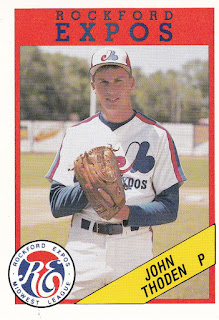 North Carolina head coach Mike Roberts knew how much his ace John Thoden meant to his club in 1989.

What he meant was 11 wins to no losses, the 11th a regional win in late-May over Nicholls State.

"We wouldn't be in this regional if not for the many clutch games he has won for us," Roberts told a regional newspaper service. "He was the right pitcher for us against Nicholls."

Thoden went on from North Carolina to have the opportunity to win clutch games in the pros. His pro career, though, lasted only five seasons. He never got the chance to win a clutch game above AA.

Thoden's pro career began in 1989, taken by the Expos in the 11th round out of North Carolina.

At North Carolina, Thoden put together that stellar 1989 season. He went 12-1 over 19 starts, leading the Tar Heels to a College World Series birth. The previous summer, Thoden pitched in the Cape Cod League, going 9-1 and later making the league Hall of Fame.

In the win that sent North Carolina to the College World Series, Thoden threw a complete game, six-hitter, according to The Associated Press.

"We felt that John Thoden was the man we wanted to pitch in the final," Roberts told The AP afterward. "Some people second-guessed us and that gave us a little bit of go."

With the Expos, Thoden started at single-A Jamestown, playing a single game. He moved to single-A Rockford for 1990, also seeing high-A West Palm Beach. Between them, he went 7-8, with a 2.77 ERA.

For 1992, Thoden moved to independent Salt Lake City. He went 9-3 over 15 starts. He also posted a 1.79 ERA. In mid-August, Thoden threw a complete-game shutout, according to The Deseret News.

"We had great offense and outstanding defense - balls hitting players' gloves and going to another player (for outs)," Thoden told The News after that win. "And it's a lot easier when you have a three-run lead in the first, as long as you keep your concentration."

Thoden played one more season, signing on with the independent St. Paul Saints for 1993. He went 6-4 over 15 starts for the Saints. He played well enough for the Marlins to purchase his contract a the end of the year, but he isn't recorded as returning for 1994.