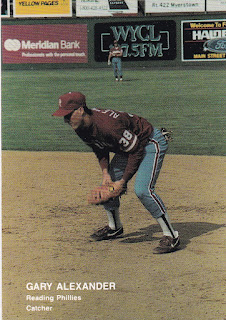 In the midst of a deep post-season run in May 2009, Freedom High School baseball coach Gary Alexander credited his team's skills for getting them to that point, according to MaxPreps.com.

That post-season run for the Oakley, Ca., school has been one of several for Alexander in his long high school coaching career. He started that career after one as a player. He played seven seasons as a player, making AAA in three seasons. He never made the majors.

Alexander's playing career began in 1987, taken by the Rangers in the 8th round of the draft out of the University of Arizona.

Alexander played his first season between single-A Gastonia and AA Tulsa. The infielder hit .289 between them.

He returned to Scranton for 1992, hitting a three-run home run in the playoffs. It was his final season in affiliated ball. He's credited with one more season in Mexico, ending his career.

From there, Alexander stayed in the game as a high school coach. He returned to his alma mater Logan High School in Union City, serving in various capacities. He made Logan's Hall of Fame in 2010.

Alexander later moved to Antioch High School and then to Freedom. He continues at Freedom in 2014.