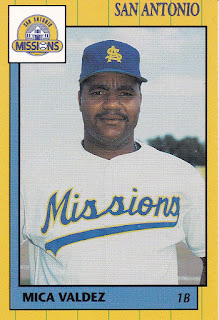 Amilcar Valdez' Bakersfield Dodgers needed a run in this May 1988 game and Valdez came through, according to The Reno Gazette-Journal.

With Bakersfield tied 4-4, Valdez stepped up to the plate and knocked a solo home run, a home run that proved the difference in the game, The Gazette-Journal wrote.

Valdez went on to hit six home run for Bakersfield that year, his third as a pro. He played in two more seasons. He made AA, but not the majors.

Valdez' career began in 1986, signed by the Dodgers as a free agent out of his native Puerto Rico. Valdez was also credited as Mica Valdez.