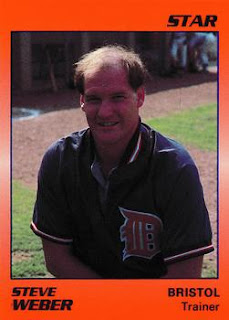 The Bristol Tigers snapped a six-game skid at Bluefield in July 1990 and manager Kenn Cunningham cited the team's luck, according to The Bluefield Daily Telegraph.

Bristol did so by getting past the rookie Orioles by a score of 2-1, winning on a diving grab from Bristol's left fielder, The Daily Telegraph wrote.

"It's been tough, we were not getting the breaks. We got one tonight," Cunningham told The Daily Telegraph. "That line drive was the play of the day."

Bristol may have gotten the break that night in the win, standing guard for other kinds of breaks, the kinds that could derail careers, was Bristol trainer Steve Weber.

The 26-year-old Weber returned to Bristol as trainer in 1990 for his second season with the club after also serving in that capacity in 1989.

He joined the Tigers organization out of the University of Toledo, where he was listed as residing.

But another trainer for Bristol, Steve McInerney, explained the job to The Greatest 21 Days in 2011. McInerney served as Bristol trainer in the mid-1980s.

At that level of the minors, McInerney recalled, trainers are also in charge of equipment, travel and meal money. It's further up the ladder where the job became more focused.