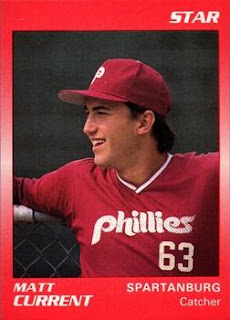 Matt Current's Butler County Bombers took the 2005 tournament opener, the Bombers putting up 10 to their opponent's 8. The team, though, lost the next two, bowing out of the contest.

Current, though, still thought highly of his team. After all, this was a team of 10-year-olds.

"We left everything we had on the field today," Current said, according to the Bombers' Web site, "and I couldn't be more proud."

Current was speaking as an experienced youth coach from his native Middletown, Ohio. Current was also speaking as someone whose baseball career stretched back further, playing professionally for four seasons. Current, though, never got to speak as a major leaguer, making it to high-A, but no higher.

Current's professional career began in 1988, taken by the Phillies in the 22nd round of the draft, out of Middletown High School in Ohio.

Current moved up for 1990, hitting single-A Spartanburg. He ended up hitting .211, knocking in 14 in 68 games that year. That July, though, Current knocked in a game-winner with a 14th-inning single.

Current has since returned to his hometown, serving as a youth coach with the Bombers, listed in 2012 as team president and coach for the 9U and 17U teams.