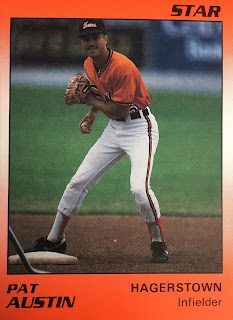 Pat Austin could hit. He could also run. But his defense, that was a liability, at least according to some, the Reading Eagle wrote in 1991.

It was a label he was trying to shake, with his fourth organization in three years. But it wasn't a label for his then manager, Don McCormack.

"He might not have the greatest arm in the world, but you don't need one at second base," McCormack told The Eagle. "He makes up for his lack of arm strength with quickness, and he's got good range."

Austin joined Reading for 1991 having played in the Orioles, Cardinals and Tigers systems in recent years.

He was originally drafted by the Tigers in the fifth round of the 1986 draft. Sent to rookie league Bristol, Austin proceeded to swipe 48 bases, then an Appalachian League record.

"Because of their speed, they are a threat to steal any time they get on base," Chambliss told the Toledo Blade that year. "You can imagine the pressure that puts on a pitcher."

For 1990, Austin was no longer with the Tigers system. He started 1990 with the Cardinals' AAA team at Louisville, but he only played in eight games there before being signed by the Orioles and sent to AA Hagerstown, hitting a solid .307.

He was expecting to head to AAA Rochester for 1991, but was released on the final day of spring training, according to The Eagle. He signed on with the Phillies and was sent to AA Reading. He hit .289 in 91 games. It would be his final professional season.