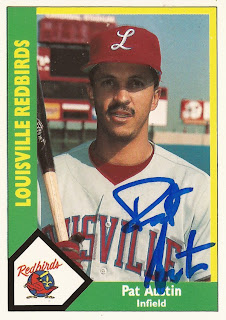 Coming out of Wilmington College in Ohio, Pat Austin was quick. But he didn't know exactly how to best use that quickness, he recalled recently.

That changed in rookie ball, in Bristol, Tenn. There, under manager Tom Gamboa, Austin became a base stealer.

"I learned so much about how to steal. Before it was basically just about speed," Austin recalled to The Greatest 21 Days, crediting Gamboa with relaying that knowledge. "He did a great job in teaching me the actual things to look for and stuff along those lines.

"I was able to carry that with me all the way through my career."

That year at Bristol, Austin took that knowledge all the way to 48 stolen bases over 68 games, better than the Appalachian League mark of 43 set just four years earlier by Vince Coleman.

Austin's, though, never could carry that knowledge all the way through to the majors. He ended up playing in six pro seasons, making AAA Toledo and AAA Louisville, but never taking that last step to the bigs.
Austin spoke to The Greatest 21 Days recently from his Atlanta-area home, talking about learning the game at a young age in Ohio, then honing those skills in high school, summer ball and later college.

He also spoke of the transition from college ball to the pros, the hopes that came with his fifth-round selection and how humbling it was to make it one step away from the majors, then get sent back down the opposite way to AA.

Then there was his post-playing days, with Austin unconventionally taking something from his baseball career and turning it into a career out of baseball.

Austin's interest in baseball started back home in Ohio, when he was hardly able to walk, he recalled. He estimated he first picked up a glove when he was 3 or 4 years old.

When he became old enough to play in pickup games, empty lots in his Chillicothe neighborhood served as diamonds.
Austin recalled he and his friends kept playing those pickup games through middle school and even high school, those same empty fields serving as the backdrop to Austin's development.

"I played a lot, whether it was traveling or just games," Austin said. "We played in empty fields probably all the way up through high school."

At Bishop Flaget High School, Austin played both basketball and baseball, his baseball team making it to the sectional finals his last two years.

Austin continued playing both baseball and basketball after moving up to Wilmington College. Austin, though, soon dropped the second sport, after getting some encouraging information from one of his baseball coaches, he recalled.

"Once my baseball coach told me there were some professional scouts comng to see me play, then I gave up basketball and concentrated totally on baseball," Austin said.

Austin hadn't really garnered much interest from scouts when he was in high school, though he did have success there and on his summer league American Legion team.

When he was 17, he recalled his summer league team making the state finals, only to get beat by a team that had future major leaguer Kent Mercker on the mound. Mercker, Austin recalled, threw a three-hitter that game.

Over the course of the double header, Austin recalled going something like 4 for 6 with some extra-base hits. After the game, it was Austin's coach who got to talk to some scouts.

"I kind of knew then, in my own heart, that this was something, I was good and I had a chance," Austin said.

In 1985, Austin ended up hitting .465 for Wilmington, his speed taking him to 15 triples, according to the school. The next year, he picked up 76 hits. He was inducted into the Wilmington Quakers Hall of Fame in 2010.

By the time June 1986 came around, scouts from the Tigers thought enough of Austin to have the team select Austin in the fifth round of the draft.

"It was an amazing thing to us, fifth round," Austin recalled of his selection. "I think we all understood that that was pretty good. For a young kid in college that didn't try to study too hard, it couldn't have worked out better."

From there, Austin turned pro, transitioning from college life to the minor leagues, and trying to get to the majors.