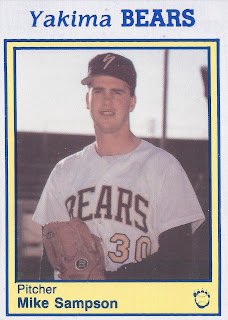 The Vero Beach Dodgers needed a stop in this August 1991 game and Mike Sampson came through, according to The Lakeland Ledger.

The score tied in the top of the 11th, Vero Beach's initial reliever recorded two outs, but also walked the bases loaded, The Ledger wrote. Sampson came on and recorded the final out - in time for his Dodgers to score the winning run in the bottom of the frame. Sampson recorded the win.

That win marked one of five Sampson picked up that year, his fourth season as a pro. Those five wins also marked his final as a pro. Sampson never made AA.

Sampson's career began in 1988, taken by the Dodgers in the 25th round of the draft out of Holyoke Community College in Massachusetts.