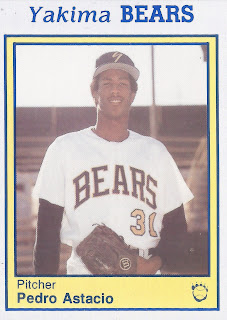 Pedro Astacio made about as good a case as any over his first four starts to remain in the Dodgers starting rotation, according to The Los Angeles Times.

"He's opening somebody's eyes here," teammate Tom Goodwin told The Times of Astacio. "If he's not, then I don't know what it takes to open somebody's eyes. Maybe he has to throw a no-hitter."

Astacio didn't throw a no-hitter, but he did later take one late. He also turned into a major league mainstay as he continued in the bigs for a total of 15 seasons. He picked up double-digit wins in six of those campaigns.

Astacio's career began in 1987, signed by the Dodgers an amateur free agent out of his native Dominican Republic.

Astacio started with the Dodgers in the Dominican Republic. He moved to the rookie Gulf Coast League for 1989. He made AA San Antonio in 1991, then AAA Albuquerque for 1992. In July 1992, he debuted in Los Angeles.

Astacio then ran into three relatively down seasons, including one stretch where he won once in 19 starts. He seemed to return to form in April 1997, as he took a no-hitter into the eighth inning against the Mets.

"He's just as important, just as valuable as all the rest of them," Dodgers manager Bill Russell told The Los Angeles Daily News of Astacio. "You saw what he was capable of doing today."

"This was a great game," Astacio told The Associated Press after the win. "You've got to get excited, especially when you're finishing the game."