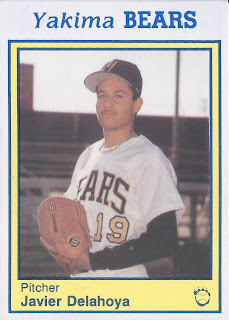 Javier De La Hoya waited years to make AAA. But he almost didn't make it, he told The Baltimore Sun. That's because his career nearly ended before that.

"Quitting crossed my mind after my arm started feeling great one time and then terrible the next," De La Hoya told The Sun. "Then, I had elbow surgery and didn't have a team. It was tough."

De La Hoya caught The Sun's interest due to the length of time he took to get to AAA - 11 seasons. He played well during his time there, making the AAA All-Star game in 2000. But, no matter how long he played, he never made the majors.

De La Hoya's career began in 1989, taken by the Dodgers in the fourth round of the draft out of Grant High School in California. De La Hoya is also credited as Javier Delahoya.

De La Hoya started with the Dodgers in the rookie Gulf Coast League. He moved to short-season Yakima, high-A Bakersfield and high-A Vero Beach for 1990. He went 8-8 overall, with a 5.08 ERA that year.

De La Hoya moved to the Marlins system in 1994, playing at high-A Brevard County and AA Portland. He then missed much of 1996 and all of 1997. He returned briefly in 1998 with the Orioles at AA Bowie.

At Bowie in 1999, De La Hoya went 9-1 over 12 starts. He went eight scoreless in a May win and earned praise from his pitching coach, Dave Schmidt, according to The Washington Post.

"He's been throwing like that for his last three or four starts," Schmidt told The Post. "He knows how to pitch."