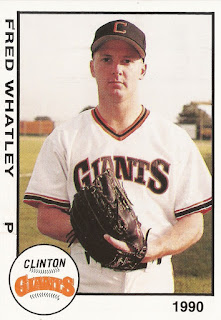 Fred Whatley pitched frequently for California Baptist University in 1988. He fooled hitters, too.

Whatley pitched in a total of 131 innings for the Lancers in 1988, still second best in a season at the school, according to California Baptist's 2015 record book.

Whatley then set down 118 batters in all in those innings, the best single-season strikeout performance at the school.

Whatley went on from California Baptist to Azusa Pacific University and to the pros. His pro career saw him keep up a similar strikeout pace, but it also saw him play only two seasons. Injuries ended his career at high-A.

Whatley's career began in 1990, signed by the Giants as an undrafted free agent out of Azusa.

Whatley started with the Giants at single-A Clinton and short-season Everett. He arrived at Everett in early July. He got into eight games in relief there, posting a 4.11 ERA.

He got into four games at Clinton, starting three, ending with a 3.66 ERA. He struck out 37 in 35 innings between Clinton and Everett.

He moved to high-A San Jose for 1991. In nine relief appearances there, he posted a 1.80 ERA, but injuries ended his career.