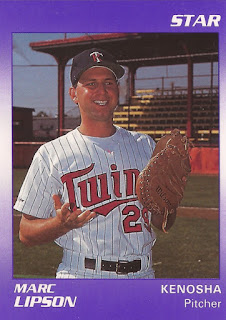 One of Marc Lipson's players at Mount de Sales Academy committed to a local college in November 2011 and Lipson knew how important that was.

"This is a very big deal," Lipson told Georgia TV station WMAZ. "It's very difficult for kids to be recognized by colleges these days and to secure some kind of financial assistance to play the sport they love."

Lipson was recognized years earlier enough to play at the University of Georgia and in the pros. His pro career was one where he saw four seasons and made AA. But he never made the majors.

Lipson's pro career began in 1989, signed by the Twins as an undrafted free agent out of Georgia.

At the University of Georgia, Lipson went 9.2 innings in the May 1988 SEC tournament without giving up a run. He, along with teammate Steve Muh drew praise from their coach Steve Webber, according to The Gainesville Sun.

"The way Muh and Lipson were able to stop a strong hitting Kentucky team was the whole story," Webber told The Sun after the win.

That March, Lipson pitched three innings without giving up a run in a Georgia win.

With the Twins, Lipson played his first season between the rookie Gulf Coast League and Elizabethton. In 33 relief outings between them, Lipson had a 2.54 ERA and 10 saves.

Lipson has since gone on to be a teacher and a high school coach at Mount de Sales Academy in Macon, Ga.