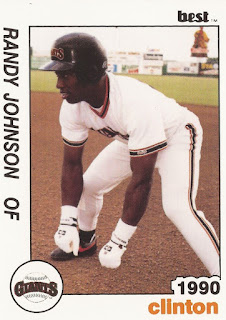 Randy Johnson signed on with the Giants as a free agent in 1989. He then set about trying to prove his worth, The Spokane Chronicle wrote.

He did that in a July game, accounting for four of his Everett Giants' six runs in a win over Spokane. He hit a three-run home run and knocked in another on a single, The Chronicle wrote.

"All I asked for was the opportunity," Johnson told The Chronicle. "I told myself I just wanted to give 110 percent and see what I can do at this level."

Johnson took that opportunity to a .273 average that year for Everett. But he could only take it to one more professional season, making single-A, but he couldn't make it higher.

Johnson's career began that year in 1989, signed by the Giants out of Portland State University.

With the Giants, Johnson started at short-season Everett. In 68 games, he hit three home runs and knocked in 27. He also stole 19 bases.