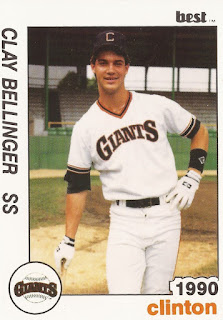 The Yankees broke camp in April 1999 and there was Clay Bellinger, right there with them.

The news from Yankees bench coach Don Zimmer and GM Brian Cashman that Bellinger would be going with the team to the Bronx, and not going back to the minors, left Bellinger hardly able to contain himself.

"Awesome, just awesome," Bellinger told The New York Daily News early that April. "When Zim and (Cashman) told me I basically broke down. This was something I was hoping for for a long time."

That long time for Bellinger was 10 years, all spent playing in the minor leagues. But the wait turned out to be worth it. Bellinger spent parts of four seasons in the majors. He also got to play in three postseasons, two World Series, experiencing a third.

A native of Oneonta, NY, Bellinger's trek to the major leagues, and the World Series, began in 1989, taken by the Giants in the second round of the draft, out of Rollins College in Florida.

He started that year at sort-season Everett, hitting .200 in 51 games. In one late July game, though, Bellinger had two hits and two RBIs.

Bellinger moved to single-A Clinton in 1990, hitting .217. He made AA Shreveport in 1992, then AAA Phoenix in 1993. Bellanger stayed at Phoenix through 1995, then moved to AAA Rochester with the Orioles in 1996. He went 3 for 4 in one game for Rochester that year, hitting a home run off the scoreboard.

He arrived with the Yankees in 1997, playing that season and the next at AAA Columbus.

Bellinger played much of 1999 - nearly 10 years after he was first drafted - in the major leagues for the first time. Bellinger got his first start and his first hit April 14, against the Orioles.

"It's been something I've been waiting for my whole life," Bellinger told The Daily News. "Growing up a Yankees fan, you think maybe. I'm just happy to be in the big leagues."

By September, Bellinger had gotten into 16 games, but they were major league games. On Sept. 2, he hit his first major league home run, and he did it at home.

"You always dream about it, but especially hitting it here in Yankee Stadium because I only grew up three hours from here," Bellinger told reporters. "I'm just happy to contribute. You know, it's been a long time."

In all, Bellinger got into 32 games for the Yankees on the year, getting nine hits in 45 at bats. He also made the postseason roster. He got into a division series game and three in the ALCS, getting one at bat.

He even got introduced before Game 3, though he didn't play in the series. Before that game, Bellinger told The Daily News he expected it to be special. "This has been the best year of my life," Bellinger told the paper.

Bellinger was back with the Yankees in 2000, becoming almost a regular. Bellinger got into 98 games for the Yankees, hitting .207, with six home runs.

He quickly got one of those home runs in April, giving the Yankees a 10-inning, 5-4 win against the Rangers.

Bellinger did play in that fall's classic, getting into four of the five games, though not getting to the plate.

In 2001, Bellinger got into 51 games with the Yankees, his last significant time in the majors. He hit .160, with five home runs. He hit two of those home runs in one August game. That November, Bellinger got his first World Series at bats, two strikeouts late in a 15-2 Game 6 loss.

Bellinger's final major league games came in 2002, two games with the Angels. He played through 2004, at AAA Fresno with the Giants in 2003 and at AAA Ottawa with the Orioles in 2004. In that last year, Bellinger also saw time in the Olympics, playing for Greece.

Bellinger has gone on to change careers and go into firefighting, according to the East Valley Tribune. He's also continued with baseball, through his son's Little League team, coaching his son Cody to the Little League World Series tournament in 2007.

To The New York Times in the aftermath of the win, Jennifer Bellinger recounted the moment the previous April, when her husband finally made the majors.

"Clay called me from Anaheim and he was crying," Jennifer Bellinger told The Times. "All those years, all those towns, and it finally had paid off."