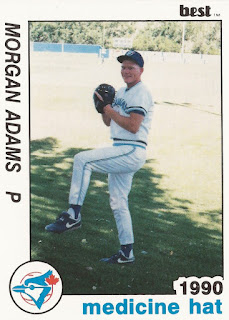 Morgan Adams came back from a rough first two innings in this May 1989 game, but he couldn't get his team a win, according to The Oklahoman.

Adams, pitching for Olustee High School in Oklahoma, gave up four runs in those two innings. He then held his opponents hitless and struck out 12 as Olustee lost 4-3, The Oklahoman wrote.

Adams went on from Olustee to play as a pro. His pro career, however, turned out to be brief. He pitched in 13 games, starting two, marking the extent of his time in the pros.

Adams' career began that year in 1989, taken by the Blue Jays in the 35th round of the draft out of Olustee.

At Olustee, Adams made the 1989 Oklahoma Coaches Association All-State Games.