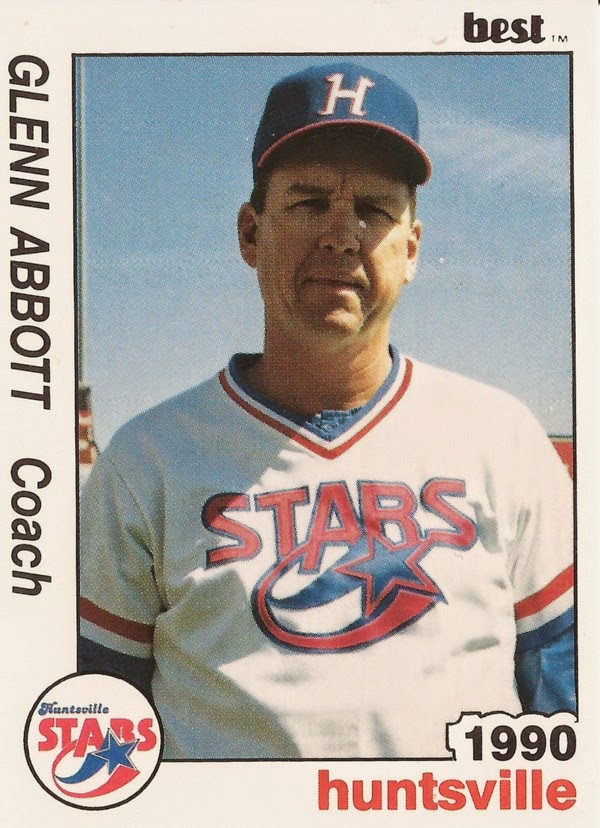 Glenn Abbott's new pitching coach at Detroit, Roger Craig, sized him up to The Associated Press upon Abbott's arrival for the stretch drive in August 1983.

Abbott then was a veteran of 10 major league seasons, but he was in his first season since a lost year to elbow surgery.

"He's mostly a sinker, slider pitcher, a control pitcher," pitching coach Roger Craig told The AP. "To be effective, he has to keep the ball down - especially in this park where the fences aren't that far away."

Abbott ended up playing one more season in the majors. He then went on to a a post-playing career, doing the same kind of assessments as a pitching coach in the minors. And he continues that career in 2014 as pitching coach for the AA Binghamton Mets.

Abbott's career in baseball began in 1969, taken by the Athletics in the eighth round of the draft out of the University of Central Arkansas.

Abbott started at short-season Coos Bay. He made AA Birmingham and AAA Iowa in 1972. He then debuted in Oakland in July 1973.

Abbott got five outings, three starts, that first year. In his second major league start, he went the distance, recording a 3-1 win over the Royals. His first start came in July, where he went three and gave up two earned.

"I was a little more relaxed than I was that first start," Abbott told The AP afterward. "I was able to put the ball where I wanted to."

Abbott returned to Oakland for 1974, staying with the team through 1976. In 1975, he took part in a four-pitcher no-hitter. His part was a perfect sixth.

For 1977, Abbott moved to the Mariners in the expansion draft. He also got his first of two seasons with double-digit wins. He went 12-13 in Seattle's inaugural season. The 1980 campaign was his other with 12 wins.

He stayed with the Mariners into 1983. His 1982 season, though, was lost to elbow surgery. He went on a rehab assignment that year, but got viral meningitis. Despite those ailments, he made it back to Seattle in June 1983. His first game back was a complete game.

"I couldn't even throw the ball last year," Abbott told The AP after that first start back. "There were a lot of negative thoughts going through my mind."

Abbott finished out his career in 1984 with the Tigers. By 1990, his coaching career was underway at AA Huntsville. He moved to AAA Tacoma for 1991. He stayed in the Oakland system through 2002.

He joined the Mets system for 2011 at single-A Savannah, moving to Binghamton for 2012. In 2013, he watched over and assessed Mets prospect Rafael Montero.

"He's done a nice job of very consistently this year locating in and out," Abbott told MiLB.com that June. "I think he's ahead of his years. He's only been in the States here for three years and he pays good attention, has a great idea of what's going on. Still learning all the time."

Back in 2002, when he was still in the Athletics system, Abbott told MLB.com why he worked as a coach.

"I feel like I am giving something back to the game," Abbott told MLB.com. "I didn't make a lot of money, but got a chance to play in the Major Leagues and that's all I wanted. I still have gusto for the game and enjoy going to the park every day."