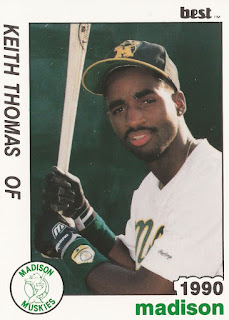 Coming out of high school in 1986, Keith Thomas had a choice to make, according to The Chicago Tribune.

"If I can get good money, and get it guaranteed, I'll go," Thomas told The Tribune. "If not, I'll go to college and get my degree. The speed I have in track, the scouts know I can utilize it in the outfield. I've got the tools, I just need the coaching."

Thomas ultimately chose to go pro. But he also later returned to college to run track. His baseball career ended up being a long one, 14 seasons. But he couldn't run himself to the majors.

Thomas' career began that year in 1986, taken by the Reds in the second round out of Kenwood Academy in Chicago.

Thomas played his first three seasons in the Reds system. He started in the rookie Gulf Coast League, moving to rookie Billings in 1987 and then single-A Greensboro in 1988. He hit .240 at Greensboro, stealing 30 bases.

He moved to the Athletics system in 1989, playing at single-A Modesto. He split time in 1990 between Modesto and single-A Madison. He knocked in a run on a sacrifice fly in an August game for Madison.

Thomas moved to the Royals system and single-A Appleton mid-1991. He stole 21 bases. For 1992, he arrived in the Pirates system, spending two seasons there.

In 1992, Thomas played largely at high-A Salem. He also got 22 games at AA Carolina. He knocked in two on a June triple for Salem, getting called out as he tried to stretch it to a home run. He hit a total of 20 home runs on the year.

Along the way, The Beaver County Times noted Thomas was an All-American sprinter at Chicago State.

Thomas continued playing in the minors into 1996, ending with the Padres and Reds systems. He then moved to independent ball.

In 1998 and 1999, Thomas played for independent Newark. In an August 1998 contest, Thomas knocked in eight runs. Playing for Atlantic City in August 2000, Thomas hit a home run against his former team.