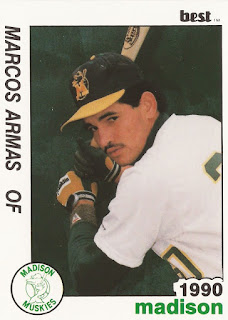 His Athletics down by two, Marcos Armas did what he could do to help the team back in leading off he ninth of this May 1993 game: He hit a home run.

His home run, though, didn't set up an Oakland win. The Athletics took the 12-11 loss, a game in which Armas earlier doubled and scored.

That game provided two firsts for Armas. He got his first major league hit and run scored earlier in the game, his second game in the majors. He then hit his first home run.

Armas ended up getting few other hits and that home run proved his only one in the bigs. He got into 15 games that year for Oakland, marking the extent of his major league career.

Armas' career began in 1987, signed by the Athletics as a free agent out of his native Venezuela. He is the brother of Tony Armas and uncle of Tony Armas, Jr.

Armas started with the Athletics in 1988 in the rookie Arizona League. He moved to short-season Southern Oregon for 1989. He hit .316 there in 36 games.

Armas then returned to Huntsville for 1992. He hit a two-run home run in a May game, helping Huntsville to a win.

He made AAA Tacoma in 1993. He also made Oakland. That spring, McClatchy News Service noted the Athletics were high on Armas. He also went 3 for 3 in a spring game. He got 15 games with the Athletics. He picked up six hits in 31 at bats.