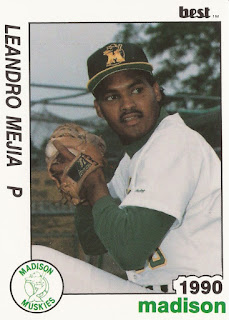 It was just one complete game, but it got Leandro Mejia on his team's leader board in 1991.

Mejia's complete game came with the single-A Madison Muskies. He was one of four Muskies to go the full nine that year. No one on the team got a second one.

The Mejia complete game came in his fourth professional season. It was his first complete game in that time. It was also his last. That season with Madison turned out to be his final season as a pro. He never made AA.

Mejia's career began in 1988, signed by the Athletics as a free agent out of his native Dominican Republic.

Mejia first hit the field in the rookie Arizona League. He got into a single game, a single inning. He gave up one hit and no runs.