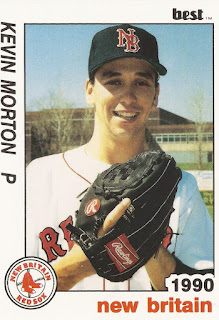 In his third month in the bigs in 1991, Kevin Morton had learned a few things, he told his hometown Norwalk Hour.

And he learned them in the majors.

"It's just a learning experience," Morton told The Hour. "You pick up an abundance of information and the key is to use it to your advantage. Hey, I just turned 23, I'm still learning."

For Morton, he would only get a few more chances to do that learning in the majors. He would play four more seasons as a pro, but he never returned to the bigs.

Morton's pro career began in 1989, taken by the Red Sox in the first round of the draft, out of Seton Hall University.

With the Red Sox, Morton played his first season between the Gulf Coast League, short-season and single-A Lynchburg. Between them, he went 6-6, with a 2.08 ERA.

"He mixes in an occasional changeup and you can just see what kind of competitor he is on the mound," Lynchburg manager Gary Allenson told The Hour that August.

In August, the left-hander Morton beat Kansas City in Boston by going into the eighth inning, giving up a single run.

After a season in Taiwan and a start in Mexico in 1997, Morton's career ended without him returning to the majors.