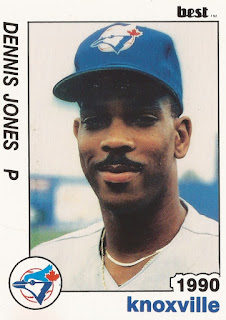 Dennis Jones had a good winter in the Dominican Republic, good enough for Jones to start thinking ahead, according to his hometown Gadsden Times.

Jones made AA Knoxville the year before and he looked to move up.

"I've talked to a couple of guys in the front office and they told me they have a couple spots open," Jones told The Times that February. "I'll either begin the season in Toronto or in Class AAA. But after pitching so well this winter, I'm confident I can make it to the majors."

Jones didn't end up making either. He returned to AA that year and the next. He never made the majors.

Jones' career began in 1985, taken by the Blue Jays in the 8th round of the draft out of Gadsden State Community College in Alabama. Jones is also sometimes referred to by his nickname Speedboat Jones.

Jones started with the Blue Jays in the rookie Gulf Coast League. The pitcher went 2-6 over 15 outings, with a 3.41 ERA. The next spring, Jones assessed his experience to The Times.

"I really thought pitching in the rookie league last year was easier than pitching at Gadsden State, except for a couple of batters," Jones told The Times. "But I know it will be tougher this time."

He then made Knoxville for 1988. That June, he struck out 11 batters in five innings of work. His 8-5 record and 2.75 ERA sent him on to his Dominican winter work that off-season.

Assigned back Knoxville in 1989, Jones went 1-6, with a 5.33 mark. Jones then started 1990 back at Knoxville. He got 11 games there before moving to the Mariners and AA Williamsport.