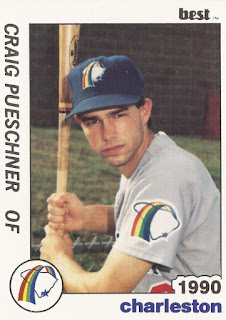 "In Pueschner, we have a fast guy with a strong arm who can really go get the ball," Dangler told The Courier. "If he can hit, and we think he can, he'll have the job."

Pueschner played the 1989 spring season at Yavapai College in Arizona, getting extra work in before signing with the Padres, the team that drafted him.

From there, he took his speed and arm strength to a five-season pro career. He never made AA.

Pueschner was drafted by the Padres in the 32nd round of the 1988 draft out of Sahauro High School in Arizona. He signed after playing a season at Yavapai.

At Yavapai, Pueschner knocked a double in a March game. He singled and scored in another March contest.

With the Padres, Pueschner started in the rookie Arizona League. He hit .308 in 46 games.

For 1992, he was sent to the Reds to complete a deal that saw Randy Myers and Bip Roberts change teams. Sent to single-A Cedar Rapids, Pueschner hit .245. He picked up three hits in one April game.