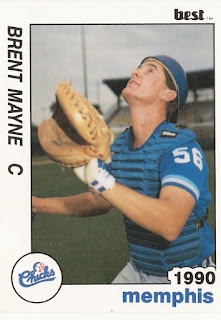 Brent Mayne approached catching knowing he had to work well with his pitcher, he told ESPN's Tim Kurkjian in 2011.

Sometimes that took the form of patting the pitcher on the back. Sometimes it took kicking the pitcher in the butt. The trick was, he told Kurkjian, was knowing which approach to take.

Mayne ended up practicing his own form of amateur psychology in 15 major league seasons, his last coming in 2004. He's also authored a book on catching, The Art of Catching.

Mayne began his career as a catcher in 1989, taken by the Royals in the first round of the draft, 13th overall, out of Cal State Fullerton.

At Fullerton, Mayne hit .350 the year the Royals selected him, and .393 the year before. But it wasn't Mayne's hitting that caught the Royals' attention. It was his defense.

"He is an outstanding defensive catcher who is close to the big league level now defensively," Royals director of scouting Art Stewart told The Associated Press after Mayne's selection.

And Mayne was close to the majors. By the end of the next season, he was there. Mayne played 1989 at single-A Baseball City, then moved to AA Memphis for 1990.

Then, in September 1990, Mayne made the jump directly to Kansas City and never returned to the minors for any meaningful time again. He got into five games for the Royals that September, going 3 for 13.

For 1991, Mayne got into 85 games for the Royals, hitting .251. He picked up three hits in an April game. In August, he caught a no-hitter, Bret Saberhagen's gem against the White Sox.

Mayne got into a similar number of games in 1992, serving as the Royals backup catcher. In late August, Mayne made the most of one start, knocking in three and scoring three runs.

"To tell you the truth, I don't put a lot of emphasis on the offense. Not when I only play once or twice a week," Mayne told The AP. "You can work on your defense during practice. But there's no way to simulate offense."

Mayne stayed with the Royals through 1995, his final year topping 100 games for the first time, with 110.

In 2000, with the Rockies, Mayne got to see life out from behind the plate, on the mound. The Rockies bullpen depleted, Mayne was pressed into service as a pitcher. He even picked up the win.

Mayne returned to the Royals mid-2001. He played his last season in 2004, between the Diamondbacks and the Dodgers.

Mayne has since gone on to be an instructor and a writer, setting down his thoughts on catching in his Art of Catching book. Mayne has also had his own blog and served as a scout.

In a November 2010 blog entry, Mayne talked about his new scouting job, and learning how to evaluate players.

"I pay attention to how they throw, hit, and field," Mayne wrote. "I watch to see how they handle adversity. I talk to other scouts, parents, coaches, and the players themselves. Basically I’m an information gathering machine in a Prius."