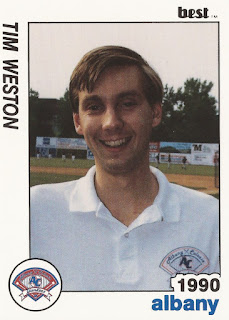 Tim Weston traced his own career back to college. His big influence at the University of Maine: Maine's head trainer Wes Jordan.

"Wes is responsible for my entire athletic training career," Weston told The Bangor Daily News in 1996. "He was a great instructor. He teaches you to work hard, do your job to the best of your ability and do it in a professional manner."

Weston spoke to The Daily News as Jordan made the Maine Sports Hall of Fame and as Weston served himself as a trainer at Colby College in Maine. Weston has since made a home for himself at Colby, being named in 2008 as the school's head athletic trainer.

Weston's career as a trainer began in 1988, signing on with the Yankees out of Maine.

Weston started with the Yankees as trainer at short-season Oneonta. He moved to AA Albany-Colonie for 1989, then returned there for 1990.

Soon afterward, Weston returned to college, signing on with Colby. In 2008, he took the school's top training job.

In October 2015, Weston spoke to The Kennebec Journal about the dangers of concussions, and how awareness is spreading.

"I see a lot of coaches who are much more educated with regard to concussion management, and parents are as well," Weston told The Journal. "I certainly get more questions from parents like 'What are the long-term effects for my son or daughter. What is going to happen down the road?'"
1990 Minor League Tally
Players/Coaches Featured: 2,164
Made the Majors: 925-42.7%
Never Made Majors:1,239-57.3%-X
5+ Seasons in the Majors: 391
10+ Seasons in the Minors:230
Posted by Steve78 at 1:00 PM