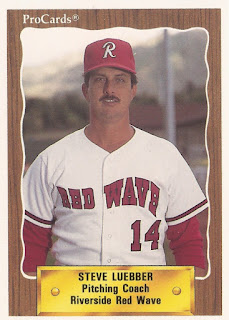 Spokane Indians pitching coach Steve Luebber looked over his new hurlers in June 1984 and he had some ideas for Northeast native Trace Czyzewski, according to The Spokane Spokesman-Review.

"He looked good the other night in our practice game," Luebber told The Spokesman-Review. "He kept the ball down pretty well. He's got a good fastball, a slider and a changeup. We'll probably try him on a curve, too."

Whatever Luebber tried, Czyzewski's career turned out to be brief. But Luebber has continued to use his pitching ideas to help young hurlers in the three decades since. Luebber's work as a minor league pitching coach continued in 2015 as pitching coach with the Royals at high-A Wilmington.

His long career in baseball began long before his coaching career. His career started as a player. He made the majors in parts of five seasons. He also came within one out of a no-hitter.

Luebber's career began in 1967, taken by the Twins in the 13th round of the draft out of Missouri Southern State University.

Luebber started in the rookie Gulf Coast League. He stayed at single-A through 1970, he then made his move to Minnesota. He made AA Charlotte in 1971 and then the majors.

He then didn't return to the majors until 1976. His near-no-hitter came that year. It came Aug. 7. He came one out away and had an 0-2 count before a single broke it up. He soon lost his shutout, but he got the win.

Despite the loss of his no-hitter, Luebber told The Associated Press he was still happy.

"You don't pitch a two-hitter in the big leagues every night and this one's sure got a lot of people's attention," Luebber told The AP.

He then soon started his coaching career in the minors with the Padres. He coached at AA Wichita in 1987. He made AAA Las Vegas in 1989, then high-A Riverside in 1990.

Luebbers moved to the Orioles for 1991, coaching at AA Hagerstown, then moved to AAA Rochester for 1992. He watched over a young Arthur Rhodes. Luebbers saw progress in Rhodes, even after a poor outing, according to The Baltimore Sun.

"He knows his breaking ball is progressing," Luebber told The Sun. "It's getting sharper. He's getting better arm speed."

Luebber has gone on to work for the Rangers as a roving instructor, then as a minors coach with the Rangers, Marlins and Royals. He's served as pitching coach at Wilmington since 2007 and continued there in 2015.

Luebber told The Wilmington News Journal in July 2015 that he used his entire career to coach his Royals prospects.