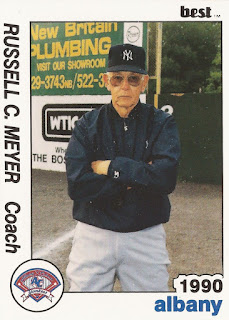 Russ "Monk" Meyer was recalled after his 1997 passing as a player with a temper, but also a player who could pitch, according to The Philadelphia Inquirer.

Meyer was a player who pitched in 13 big league seasons, including on the Phillies' 1950 National League championship squad.

"He was a good solid guy for us," Andy Seminick, one of Meyer's old teammates, told The Inquirer. "You knew the Monk was going to battle you out there. Sure, he had a temper and all, but he was the kind of teammate you wanted on the field."

Meyer went on from those playing days to a long career as as coach, first in college, and then in the minors. In 1992, he made his return to the majors, as a bench coach with the Yankees.

Meyer's long baseball career began in 1942, signed by the White Sox as an amateur free agent, out of Peru, Ill.

He played his first season for Class C Superior, spending 1943 in the service. He returned to the field with the Cubs at Class A1 Nashville for 1945.

By spring 1949, Meyer was with the Phillies, after a trade. He told The Associated Press that he believed his new team was up-and-coming, and that he wanted to beat his old team, the Cubs, that year. That was after his old manager called Meyer "terrible-tempered."

The next September, in 1950, Meyer helped stop a Whiz Kids slide by beating the Dodgers, as the team went on to win the league. In the process, Meyer told The AP afterward that he helped silence calls that the Phillies were "choking up," or blowing their league lead.

"I got even with him in the eighth inning after he popped up," Meyer told The AP about one Dodger who was particularly riding him. "Who's choking up now? I shouted. He didn't answer."

Meyer ended up going 9-11 for the Phillies that year, with a 5.30 ERA. In the World Series, he got two brief relief outings.

Meyer played with the Phillies through 1952, moving to Brooklyn for 1953. He went 15-5 that year, helping the Dodgers, and himself, to another World Series.

Meyer stayed with them through 1955 and another World Series. He didn't play his last major league game until 1959, 18 relief outings with the Kansas City Athletics.

From there, Meyer eventually found his way into coaching, serving as head coach at Illinois Valley Community College for a time. He also owned a bowling alley in Indiana. In 1981, he signed on with the Yankees, eventually serving as pitching coach at short-season Oneonta in 1985. He moved to AA Albany by 1989, returning for 1990.

For 1992, Meyer returned to the majors, as bench coach for the Yankees, something he told The New York Times was the fulfillment of a dream. Meyer was also a coach respected by his players, The Times wrote.

"He cares about every player," Yankees pitcher Jeff Johnson told The Times. "He can be hard on you if he gets frustrated, but you know he cares about you. I get the feeling that the players in the old days really played for love of the game."