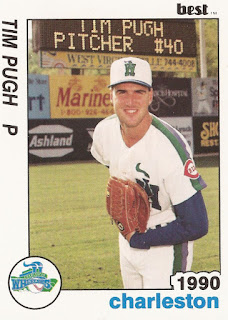 Coming off a September in 1992 where he started seven games, winning four, Tim Pugh prepared to vie for a permanent spot in the Reds rotation.

"I like to think I made this team last year and I feel that if I have a good spring," Pugh told The Associated Press that February, "things will take care of themselves. If I can just take off from where I left off, my chances are pretty good."

Pugh had a good enough spring to make the team, starting a total of 27 games that year for the Reds, winning 10. It was his second season in the majors. He would go on spent time in the majors in six seasons.

Pugh's career began in 1989, taken by the Reds in the sixth round of the draft out of Oklahoma State. He played that year at rookie-league Billings, his next at single-A Charleston.

He made AA Chattanooga and then AAA Nashville in 1991, returning to Nashville for 1992. That September, he got his call-up to Cincinnati.

"I still feel like a rookie, but I feel more comfortable now," Pugh told The AP after his third win. "It's part of being young and excited. I'm trying to go at them with my best stuff. If they beat my best, there's nothing I can do."

Pugh went on to start those 27 games for the Reds in 1993, winning those 10 games. He also lost 15 and posted an ERA of 5.26. In one late-April game, Pugh used his sinker to help get the Pirates to hit into five double plays, The AP wrote.

In late September, Pugh picked up his 10th win, and took a no-hitter into the ninth. The Padres broke up the bid with one out in the final frame.

"I wanted to come in with a lot of intensity and get my 10th win," Pugh told The AP afterward. "It was just one of those nights. You get lucky sometimes."

It was the most time Pugh would see in the majors. In 1994, he started nine games. In 1995, he started 12, but getting into another 16 in relief. He closed out the year giving up one hit in five innings, putting himself in the discussion for a post-season roster spot.

"I wanted to give myself a shot at this," Pugh told The AP. "Whatever the team decides will be fine with me."

Pugh didn't make it into a post-season game. He got into another 29 games in 1996, between the Reds and the Royals and two more in 1997 with the Tigers, to finish out his major league career.

His professional career, though, wouldn't end until 2000, playing for Atlanta at AAA Richmond and in independent ball at Somerset.