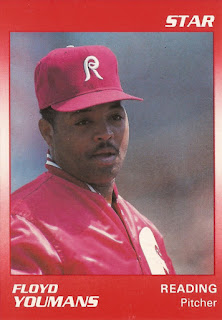 Floyd Youmans' season in 1986 was a bit unexpected. That's something his manager with the Expos Buck Rodgers noted to The Montreal Gazette after Youmans notched his 11th win in early August.

"In spring training he was ticketed for AAA," Rodgers told The Gazette, "but he's been steadily getting better."

The 22-year-old Youmans ended that year with a record of 13-12 and a 3.53 ERA. But he couldn't continue that improvement. First he was slowed by drug issues, finally his major league career ended just three seasons after that 1986 campaign with shoulder surgery.

Youmans' career began in 1982, taken by the Mets in the second round of the draft out of Fontana High School in California. Youmans also attended Hillsbourough High School in Florida with another future major leaguer, Dwight Gooden.

Youmans started at rookie Kingsport in 1982. He then made it to AA Jackson in his third season with the Mets. For 1985, Youmans moved to the Expos in the trade that sent Gary Carter to the Mets.

Youmans then played 1985 at AA Jacksonville and AAA Indianapolis. That July, he made his debut with Montreal, called up directly from Jacksonville. He made it into the seventh against the Cardinals in his debut, debut, but got a no-decision.

"I had a little jitters before the start but no more than with any game in Jacksonville," Youmans told The Gazette. "I felt very comfortable. I was a little nervous until I struck out the first batter (Vince Coleman), then I relaxed."

His 1987 season saw him go 9-8, with a 4.64 ERA. He threw a three-hitter that July after weight problems had sidelined him twice that year, The Associated Press wrote.

"This is fun, that's for sure," Youmans told The AP, noting the win was the Expos' fourth-straight. "This is the kind of streak that makes you forget about everything else that's been happening to me this year."

More would happen. The next June Youmans was suspended for drug use. He didn't play that rest of that season.

Youmans returned to the majors for 1989 with the Phillies. He got 10 starts, ending with a 5.70 ERA before having surgery on his pitching shoulder. It was his final time in the majors.