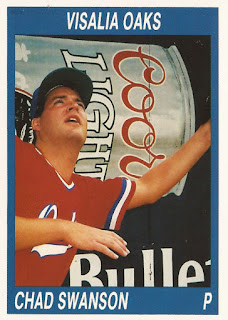 Chad Swanson explained the trick to The Chicago Tribune. The trick was pennying a door.

"With the door closed, one guy pushes on the top so it bends," Swanson told The Tribune in July 1988. "Then the other guy slides the pennies in the space between the door and the doorjamb, as close as he can to the latch. You do the same thing on the bottom."

He explained it to The Tribune after he and teammate Pat Bangtson were fined $25 each, after successfully deploying the trick on two umpires.

Swanson was in his second season as as pro that year in 1988. He went on to get just two more, never getting the chance to deploy his baseball antics in the major leagues.

Swanson's career began in 1987, signed by the Twins as an undrafted free agent, out of St. Cloud State University.

At St. Cloud, Swanson posted a 3.41 ERA in his final season, along with seven complete games and three shutouts.

He played most of 1989 with single-A Visalia, getting 30 outings there. He also got 10 back at Kenosha. Between them, he recorded a 2.75 ERA and two saves.

For 1990, what turned out to be his final season, Swanson got into 39 games, with an ERA of 4.99. He also picked up three saves, ending his career.