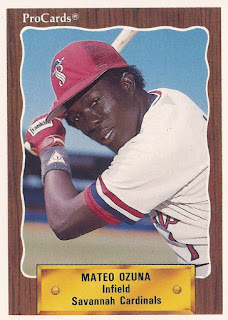 Mateo Ozuna and his speed were seen as bright spots for the Cardinals at single-A in July 1990, according to The Tulsa World.

That's because Ozuna had 42 stolen bases by then, on his way to 66 on the year. Two of those later stolen bases came in an August inning.

Ozuna's career began in 1989, signed by the Cardinals as a free agent out of his native Dominican Republic.

Ozuna played his first two seasons at Savannah. He played 1989 largely at second base. He hit .208 on the year and stole 24 bases. He went 2 for 4 in an early April game. One of those hits was a run-scoring infield single.

Ozuna split 1992 between high-A St. Petersburgh and Savannah. His stolen base total dropped to 44. He hit .226 overall that year.