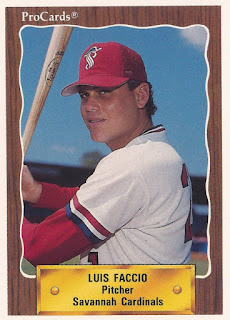 Luis Faccio was among the league leaders strikeouts and he showed it in this August 1990 game against one of the South Atlantic League's top hitting teams, according to The Savannah News-Press.

Faccio went eight innings against rival Augusta, giving up a single run and picking up the win. He also struck out eight. Those eight strikeouts brought his season total to 164, just three off the league's top pitcher in that category, The News-Press wrote.

Faccio's strikeout total that year - 169 - ended up being the highest of his career. It was his sixth season as a pro. He got into just two more. He never made AAA.

Faccio's career began as a 17-year-old in 1985, signed by the Phillies as a free agent out of his native Puerto Rico.

Faccio started with the Phillies at short-season Bend. He got into seven games in relief, giving up six earned. Three of those runs came in an inning of work in August.

He played 1987 between the GCL and short-season Oneonta. In 17 total outings that year, Faccio had a 3.02 ERA.

Faccio split 1988 between single-A Prince William and single-A Fort Lauderdale. At Fort Lauderdale in June, Faccio went three innings in relief and picked up a save. He had 26 total outings and a 5.31 ERA.

Faccio signed with the Cardinals for 1989, spending that year at single-A Springfield. He turned starter and went 7-9, with a 4.63 ERA.

For 1990, it was single-A Savannah. He threw a complete game in mid-July against Spartanburg. His strikeout haul from that game was 10, according to The Spartanburg Herald-Journal. He went 8-11, with a 3.88 ERA.