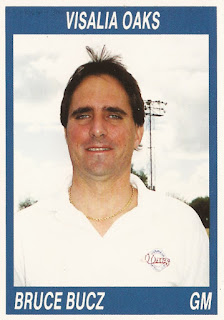 Bruce Bucz was especially interested in his Visalia Oaks winning, The Los Angeles Times wrote in 1989.

That's because as team general manager his job filling seats and selling ads was made much easier with more Ws than Ls.

"Winning is the best promotion," Bucz told The Times that August.

Bucz was in his third season as general manager for the single-A Oaks that year. He went on to serve a few more and serve as a local event promoter in Visalia.

Bucz became a minor league GM after graduating from Southern Illinois University with a bachelor's in athletic administration and a master's in sports management, according to his card back.

He started with the team as assistant general manager, serving in that capacity for three years before moving to the top job for 1987. Along with Bucz, both his parents, Joseph and Mary Bucz, worked at the park.

As assistant general manager in 1986, Bucz assessed some of his new players to The Times at season's beginning. Among them was a pitcher Bucz was impressed with named Ray Velasquez.

"I wouldn't be surprised if he moved up before the season ends," Bucz told The Times.

Bucz continued as Visalia general manager through at least 1992. In 1996 he was named vice president of marketing for the Fresno Falcons hockey team.

He later served as director for the Visalia area's largest food pantry, the Visalia Emergency Aid Council. With the council, Bucz started the fundraiser Blues, Brews and Barbecue.