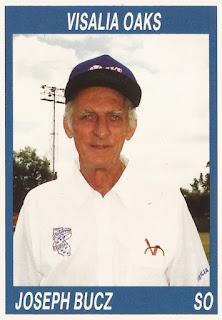 Joseph Bucz and his wife Mary were both fixtures at Visalia Oaks games.

Joseph served in stadium operations at Recreation Park. Mary also worked part time at the park and "served as the inspiration" for Visalia's Blues, Brews & BBQ festival that still carries her name.

The two started life in Chicago, marrying in 1947. Their Chicago roots made Joseph an avid Cubs and White Sox fan, according to his Cal League card. They had four children and finally retired to Visalia.

The two then became fans of a new team, the California League's Oaks. Joseph was so much a fan that he his license plates advertized that fact: "Go Oaks," they read, according to his Cal League card.

Joseph and Mary Bucz were married for 52 years at the time of Joseph's passing in 2000. Mary Bucz passed 10 years later, in November 2010 at the age of 79, according to her obituary.

Their son Bruce Bucz served as Visalia's general manager. Bruce Bucz was in his fourth season in that role in 1990.