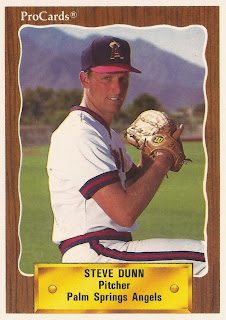 Steve Dunn picked up the win for Chapman College in this March 1987 game.

Dunn went six innings and gave up one run on three hits as his team went on to win by a score of 8-3, according to The Los Angeles Times.

Dunn went on to turn pro later that year. His pro career turned out to be brief. He saw time in just three seasons. He never saw AA.

Dunn's career started that year in 1987, signed by the Angels as an undrafted free agent out of Chapman.

Dunn played for the amateur Valley Dodgers team in early June 1987. He went 3-2 with the team before signing with the Angels.

With the Angels, Dunn played at short-season Salem. He got into 12 games there, starting nine. He helped preserve a Salem win in a July game.