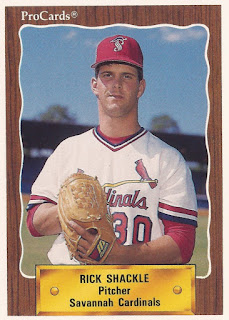 Shackle was right in the middle of it. His team up by two in the ninth, he shut down the champs, getting the final two outs with the tying run on first, according to a wire account.

Shackle would go on to turn pro the next year and play five seasons in the minors. He made AA, but no higher.

Shackle's pro career began in 1989, signed by the Cardinals as an undrafted free agent out of Delta State.

At Delta in 1989, Shackle had a 6-5 record and a 3.38 ERA by mid-May. He also made the all-conference team and won Delta's Most Outstanding Pitcher award.

With the Cardinals, Shackle started at rookie Johnson City. He got into 15 games, 10 starts, posting a 1.67 ERA.

Shackle returned to St. Petersburg full time for 1991. He pitched his team to a 4-1 win in a June start. He went 6.2 innings in an August win, giving up a single earned run.