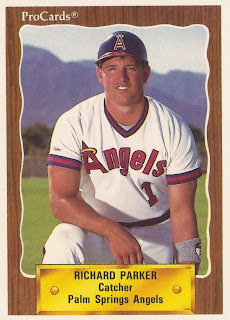 Richard Parker picked up two hits for the Bend Bucks on this August 1989 night. One of those hits proved to be the difference in the game, according to The Bend Bulletin.

Parker came up in the eighth inning with two runners on. He promptly hit the ball off the center field wall for a triple. His Bend team won the game 7 to 5, The Bulletin wrote.

Parker was in his first season as a pro that year. He got just two more. His final season included a turn on the mound. He never made AA.

Parker's career began that year in 1989, taken by the Angels in the 19th round of the draft out of Tulane University.

At Tulane, Parker knocked a single in a May 1988 game. The year before, Parker won the team's most-improved award. The next year he led the team in doubles with 10.

With the Angels, Parker started at short-season Bend. The catcher got into 36 games for the club, hitting .244. He had an RBI single in a late-August game.

He moved to high-A Palm Springs for 1990, staying at catcher. He got into 71 games and hit .176. He also tried a game on the other side of the battery. He went 2.1 innings, giving up three earned.