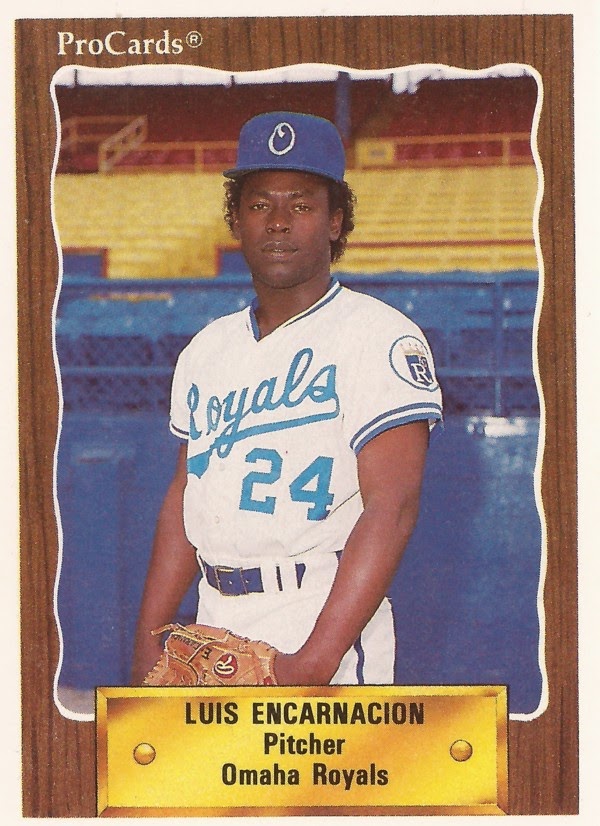 Put into the game in the seventh, the Royals' Luis Encarnacion pitched the final three innings. He struck out three and gave up only one hit. That one hit was a home run to Boston's Sam Horn.

This was Encarnacion's major league debut, July 27, 1990. It was also the best outing of his major league career, a career that spanned just three more appearances.

Encarnacion joined the Royals system in 1984, signed as a free agent out of his native Dominican Republic. The reliever began at short-season Batavia, posting a 3.12 ERA in 21 appearances.

Going through single-A Waterloo in 1985, credited with 24 saves, Encarnacion landed at AA Waterbury in 1986. He posted ERAs just under 4 both years. With Waterbury, Encarnacion pitched two hitless innings May 27 for his fifth save.

He returned to Omaha for 1990, getting his break when another with another player going on the disabled list. Encarnacion got the call-up in late July, with Luis Aquino going on the 21-day DL.

It was Bo Jackson coming off the disabled list that led to Encarnacion being set back down. Returning to Omaha, Encarnacion's 1.2 innings of perfect relief got him the win in the first game of the American Association Championship Series.