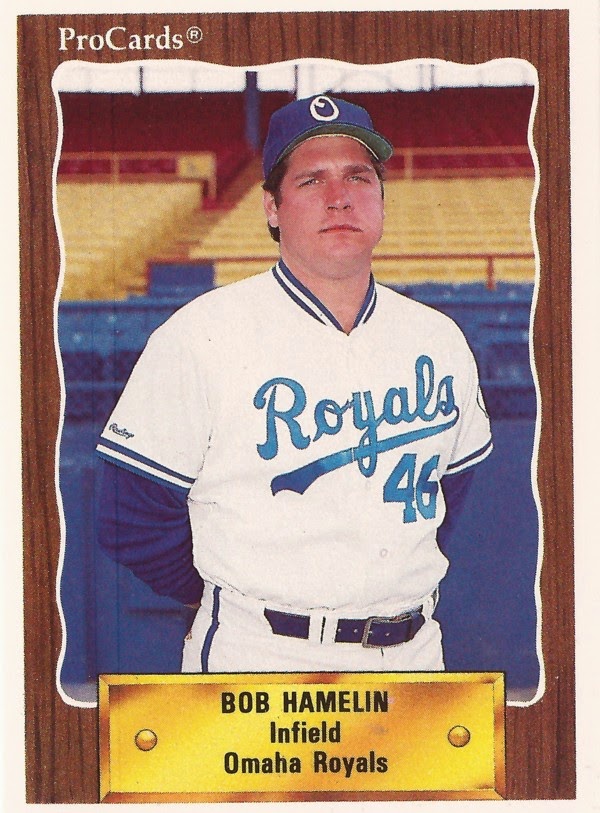 Coming out of Irvine High School, Bob Hamelin had the choice to go to Notre Dame on a football scholarship or wait for a baseball school to even send him an offer.

For Hamelin, the choice was an easy one, he told The Los Angeles Times in 1986.

"It didn't take a lot of time to think over," Hamelin told The Times. "I had told them up front that I wanted to play baseball. I had my mind made up, and they couldn't change it, I guess."

Hamelin eventually stayed local, going to UCLA. And his choice paid off, with his selection by the Royals two years later in the second round of the draft.

Always a player with promise, but slowed by injuries, Hamelin finally made the majors in 1993. The next year, he went on to win the American League Rookie of the Year.

But Hamelin's career ended up bring a relatively brief one, playing in just six big league seasons. By 1999, his playing career was over, Hamelin walking off a AAA field mid-game, telling his manager he was done, realizing his desire to play the game was no longer there.

The road to that day, though, began in 1988, in his first season in the Royals organization at short-season Eugene. Hamelin hit .298 there with 17 home runs.

That September, Hamelin told The Eugene Register-Guard he'd learned that season the importance of the mental part of the game.

That second season, Hamelin hit AA Memphis, then he hit AAA Omaha in 1990. At Memphis, though, Hamelin suffered an injury to his back that interfered with his swing, The Los Angeles Times wrote.

It also went undiagnosed until after the 1990 season. It was a stress fracture. In 1990, Hamelin hit just .232, with eight home runs. His follow-up season only saw Hamelin play 37 games at Omaha. In 1992, he spent time between high-A, AA and AAA.

In 1993, though, Hamelin played the full year at Omaha, hitting .259 and getting his home run swing back. He hit 29. He also got his first call to Kansas City. That September, he got into 16 games, hitting just .224, with two home runs.

Going into 1994, Hamelin was being looked at to replace George Brett at DH, but he got injured again - in an arm wrestling tournament. Hamelin told The Register-Guard, though, the injury wasn't serious. It ended up not being serious. In the strike-shortened season, he went on to win the Rookie of the Year.

Hamelin won the award as a 26-year-old, hitting .282 with 24 home runs. In August, just before the strike began, Hamelin used his 23rd home run to help the Royals to their 12th-straight win. The home run also set the Royals rookie mark, besting Bo Jackson's mark from 1987, The Associated Press wrote.

The next spring, his Rookie of the Year award in-hand, Hamelin told The Orlando Sentinel his 1994 numbers were what he expected going in.

"I expected 30 home runs and 100 RBIs - maybe I was off some - but you have to have those type of expectations or they will find somebody else to do the job if you can't," Hamelin told The Sentinel. "You have to hit to stay in there.''

Hamelin, though, couldn't match that 1994 campaign. In 1995, Hamelin home runs dropped to just seven and his average seemingly dropped further to .168. He did a little better in 1996, hitting .255 with nine home runs, but it was the final year of his short stay in Kansas City.

Released, Hamelin signed for 1997 with the Tigers, where he hit .270 with 18 home runs. But his short major league career was near its end. He played one more season in the bigs, with Milwaukee in 1998, hitting just .219 with seven home runs.

The complete end came in early June 1999, playing at AAA Toledo back with the Tigers. Hamelin grounded out, went back to the dugout and told his manager he was done. He retired mid-game. It came in his 12th professional season.

He later explained that he realized that he wasn't looking forward to being called up to the Tigers, who were then having a bad year, so he figured he'd just go home.

To The Times shortly after his abrupt retirement, Hamelin talked about the contrast from his 1994 season to then.

"Nothing is ever for good," Hamelin told The Times. "That was a great season in 1994 but the next year there were expectations, mostly that I put on myself."

Hamelin went on to work in the construction business and, more recently returned to baseball as a scout for the Nationals and the Blue Jays.

On returning to the game he so abruptly left, Hamelin told The Topeka Capital-Journal in 2007 he'd always wanted to come back.

"Baseball has always been my passion, and it’s something I’ve always wanted to be involved in," Hamelin told The Capital-Journal. "When I left the game, I needed to stay away for a while. But eventually I wanted to get back into it. I thought about coaching until this came up. The traveling is difficult, being away from my boys, but I’ve been surprised how much I enjoy it."