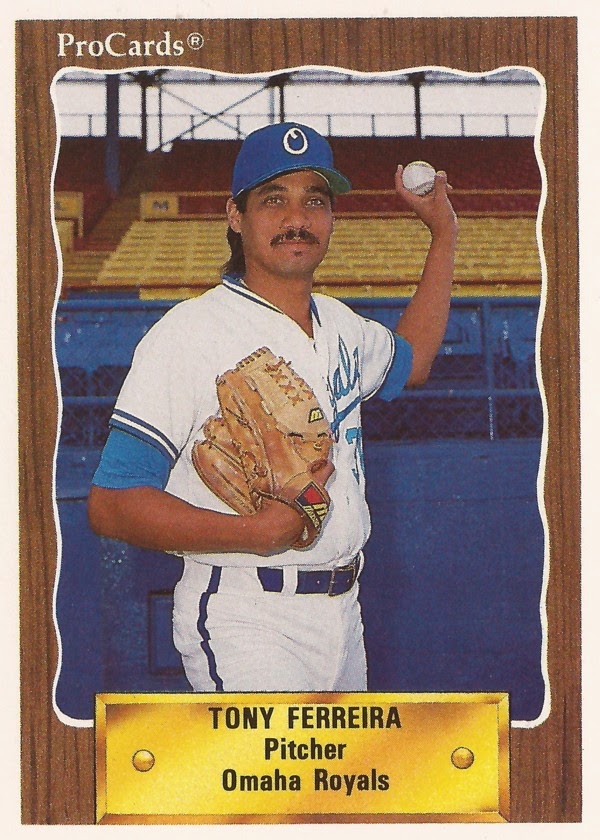 David Cone tried to squeeze one or two more seasons out of his long pitching career, so he worked during the off season of 2000-2001 to improve his delivery.

The man he worked with that off season, according to The New York Times, was Cone's longtime friend, his first roommate in professional baseball, Tony Ferreira.

Ferreira helped his longtime friend Cone as part of a long post-playing career that has seen Ferrera coach young players to considerably older players like Cone. More recently, Ferreira has served as a coach at a Florida baseball academy.

That post-playing career came after a career on the field that saw Ferreira play a decade in pro ball, a career that included a trip to the majors for all of two appearances, amounting to 5.2 innings of big league work.

Ferreira's professional career began in 1981, taken by the Royals in the second round of the draft, out of John North High School in Riverside, Ca.

Ferreira started with the Royals in the rookie Gulf Coast League, playing there with Cone. Ferreira moved to single-A Fort Myers for 1982, and got time at AA Jacksonville. Between them, he posted a 4.60 ERA in 43 relief outings.

In September 1985, Ferreira got his call to Kansas City. He debuted Sept. 17, throwing two innings of hitless ball against the Mariners. His second appearance, and final appearance, came Oct. 5, with a less successful outing. He went 3.2 innings, giving up five earned runs.

For 1986, Ferreira moved to the Mets, and AAA Tidewater, sent there in a trade. Over the next three seasons, Ferreira went through the Mariners, Giants, Yankees and Brewers systems, without making it back to the majors. He played his final season in 1990, back with the Royals at AAA Omaha.

His playing career over, Ferreira moved to coaching, heading up a training program he put together, Pro Kids Baseball. For 2012, Ferreira joined IMG Academy in Bradenton, Fla.

"Joining the IMG team will allow me the unique chance to share my years of playing and coaching experiences with youth players and fellow professionals," Ferreira said in a January 2012 IMG blog entry announcing the move. "I am looking forward to making a significant impact."