Interview Part 2: Alan Newman, For Himself 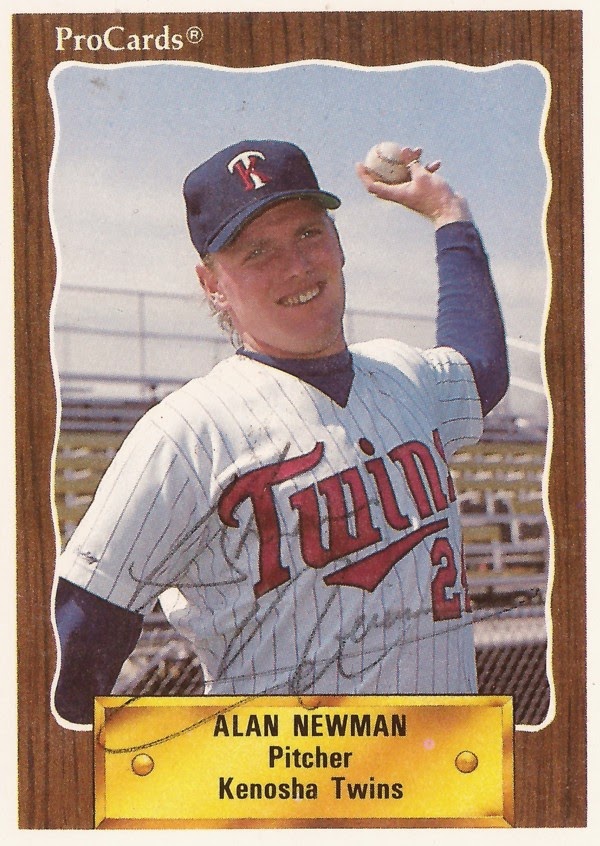 Alan Newman heard about independent ball and he wanted to give it a try.

He was going into his seventh professional season having only briefly seen AAA the previous year with the Reds. He'd also been picked up and released that spring by the Cubs.

So, he called up the Alexandria Aces of the new Texas-Louisiana League. After talking to their manager, Pete Falcone, it was done.

"He signed me," Newman recalled to The Greatest 21 Days recently. "He didn't even want to see me throw or anything. He said 'I'll take you. You're good."

Newman had been on some 40-man rosters but he also wasn't happy with the direction of his career, he recalled.

"That whole time period was when I started getting frustrated and I wanted to maybe just retire or whatever," Newman said.
"I felt like, instead of doing it for somebody else, I'm going to do it myself," Newman said. "And I went there and I actually started having fun again."

Newman ended up spending three seasons with Alexandria, made the jump back to affiliated ball. Then, in 1999, Newman made the major leagues.

Newman spoke to The Greatest 21 Days recently by phone from his home in California. Newman covered his career from its start on the mounds of La Habra, Ca., to the pro fields of the Minnesota Twins system.

Along Newman's path to the majors, there were early frustrations, that three-season detour to independent ball and then a return to the minors that eventually got him that call to the bigs more than a decade after his pro career began.

Newman played his first year as a pro at rookie Elizabethton, where he had an ERA of 8.13. His ERA markedly dropped in 1989. At single-A Kenosha that year, it came in at 2.84. The next year, between Kenosha and high-A Visalia, it was even better, 1.75.
Newman recalled seeing himself getting better.

"I kind of knew what I was doing," Newman said. "I got into a groove. I started commanding my cutter, that was my main pitch most of the time.

"Once I started commanding the cutter, I was much better. At least I knew I could throw one pitch for a strike all the time."

Newman recalled walks haunting him the most throughout his career. Later in his career, once he got to Japan, he recalled everything coming together.

"I kept my walks down tremendously at that point," Newman said. "But I also wasn't throwing it hard. I kind of had to back off a bit and throw strikes, rather than just try and throw it by everybody."

In his first five seasons, Orlando was as high as former second-round pick got. He recalled the Twins seeming to be a little more cautious with moving guys.
Starting 1991 at Visalia, Newman recalled getting frustrated, "because I felt like I was kind of losing ground at that point."

"Everything was kind of frustrating at that point," Newman recalled, noting he broke up with a girlfriend about that time, too. "I leaned on my teammates, I guess, more than anything at that point. I had good friends that I had played ball with for a while."

Newman started 1993 back at AA for the Twins, this time in Nashville. Midway through that year he was out of the Twins organization altogether, traded to the Reds. He got his first look at AAA then, eight outings, three starts, at Indianapolis.

After getting picked up and released by the Cubs the next spring, Newman tried independent ball.

His first year at Alexandria, Newman went 9-2, with a 2.83 ERA. He also struck out 128, including his second-career 17-strikeout game. He also helped the Aces to the championship series.

"I kind of liked sticking around there, helping some of the younger guys," Newman said. "I wasn't that old at that point either. I had a little bit of experience under my belt, so that was good."

He ended up staying at Alexandria for three seasons. During that time, he had offers to come back to affiliated ball. The Padres wanted him in 1994 to go to AA, but Newman passed due to the uncertainties of the strike.
"I was taking a chance because I didn't know if i was going to get the chance again," Newman said of passing on that opportunity.

He returned for spring 1995 and he played in a couple games. He got to know Padres manager Bruce Bochy then. He later ended up playing in the Padres system.

Newman played that spring, he said, because he wasn't sure what the major leaguers were doing was the right thing for everybody, including the minor leaguers, especially someone in his position.

After everyone was released, Newman returned to the Aces. In 1996, his third year with the club, Newman tried relieving.

He found he liked coming out of the bullpen.

"Even if you had a bad day," Newman explained, "you could come back the next day and throw. You weren't weren't waiting four days in between."

Then, Newman recalled, he was ready to come back.

"At that point," Newman said, "I felt like it was time for me to go back and finished what I started."