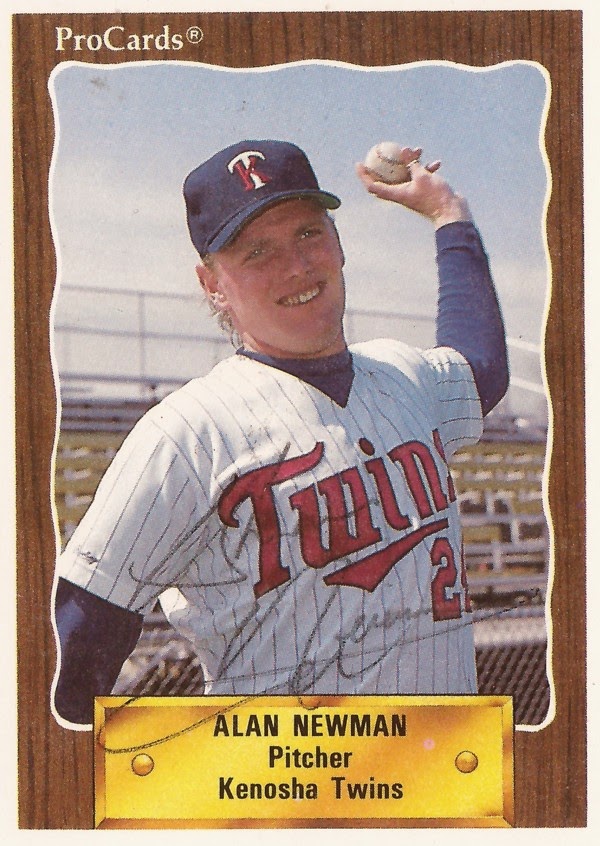 There were certain teams during his three years in Japan that Alan Newman seemed to pitch well against, he recalled.

One of those teams, he recalled, was the Chunichi Dragons.

"That probably was one of the reasons I got to stay, too," Newman recalled, "because I was a dragon killer. That's what they called it. If you beat the (Yomiuri) Giants or the Dragons, you've always got a spot."

Newman had his own spot in the pros for nearly 20 seasons. He first made the majors in his 12th season and then he made Japan in his 14th.

Newman started there with the Yakult Swallows in 2001. He also helped pitch Yakult to the Japan Series title. "That," Newman said, "was great."

Newman spoke to The Greatest 21 Days recently by phone from his home in California. Newman covered his career from its start on the mounds of La Habra, Ca., to the pro fields of the Minnesota Twins system.
Along Newman's path to the majors, there were early frustrations, that three-season detour to independent ball and then a return to the minors that eventually got him that call to the bigs more than a decade after his pro career began. Once in the bigs, he got into 19 games, playing at home in Tampa, at Anaheim, Baltimore, Minnesota and Texas.

Newman got his first call to the majors in May 1999. Joining the Devil Rays, he made his debut that May 14 at Anaheim - less than 15 miles from where he grew up.

"I was nervous," Newman said. "It was in my hometown. I was at Angels Stadium. There were tons of people calling, trying to get a hold of me. It was crazy."

In that first game, he made history: Coming in with the bases loaded, he gave up a run before he even threw a major league pitch. He did so on a balk.

"They took my stuff to the Hall of Fame because apparently nobody else had panicked when they came in for their first game," Newman said with a little laugh. "I said, 'well, at least nobody can break that record."

Newman ended up getting it together to get five outs to finish that game, though that balk and a single that immediately followed cleared the bases.

After the game, Newman recalled Tampa starter Bobby Witt talking with him. Witt faced the same batter with the bases loaded earlier in the game. That batter, Mo Vaughn, hit a grand slam.

"He said, 'That was a great idea, I wouldn't have given up the grand slam if I would have balked in a run,'" Newman recalled Witt telling him. "I was like, 'yeah, thanks Bobby."

Two outings later, on June 20, Newman picked up his first major league win. Coming into the game with one out in the 10th, he got the final five outs for the victory.
The team he did it against? It was the team that drafted him so many years before, the Twins. Newman recalled the Twins general manager Terry Ryan congratulating him after the game.

Newman also remembered getting to play catch with Wade Boggs every day, catching Boggs' knuckleball when Boggs got loose. "It was pretty fun," Newman recalled of that.

"I had some bad outings at the start, which really hurt my totals," Newman recalled. "The last few outings were pretty good. ... I think that gave me a little bit more satisfaction about it."

He returned with the Indians in 2000, choosing to sign with them over the Yankees. He made it back to the majors for one final game that June. He gave up three earned in 1.1 innings.

"It wasn't like I was getting hit really hard or anything," Newman recalled of giving up those runs in that final showing. "It was just stupid, dumb luck, basically"

After that season, Newman's agent got him a chance to go to Japan. He had offers to stay, but he saw it as a good opportunity. It was also a chance to make some money. "It was more of a guaranteed thing, so I took it," Newman said.

Newman got into 17 games that first year with Yakult, starting 10. He had a 4.18 ERA. He pitched well at first, got hurt, then came out of the bullpen focusing on American hitters. That was the year Yakult won the Japan Series.
"I enjoyed learning a new culture and going to play baseball," Newman said. "It was almost like a paid vacation."

By that time, Newman recalled learning enough Japanese to negotiate his own contract. He did that with Hiroshima for 2003. He got 14 outings, two starts that year, his time limited by injury.

That concluded his career in Japan, but he continued pitching for three more seasons. Newman returned to independent ball, playing in Jackson, Miss., Atlantic City and then Long Beach. His final professional pitch came in 2006 with Long Beach.

Newman has since returned to Southern California, where he works at an online retailer. He stays involved in the game through pitching instruction. He's also been working to try and get back into the pro game as a scout.

In his 19-season professional career, Newman pitched in 19 major league games, 73 in Japan and a total of 445 as a starter and reliever in the minors and independent ball.

Toward the end, Newman felt like he could pitch longer, but he was done.

"You always have to prove yourself," Newman said. "You can't ever rest on your laurels."