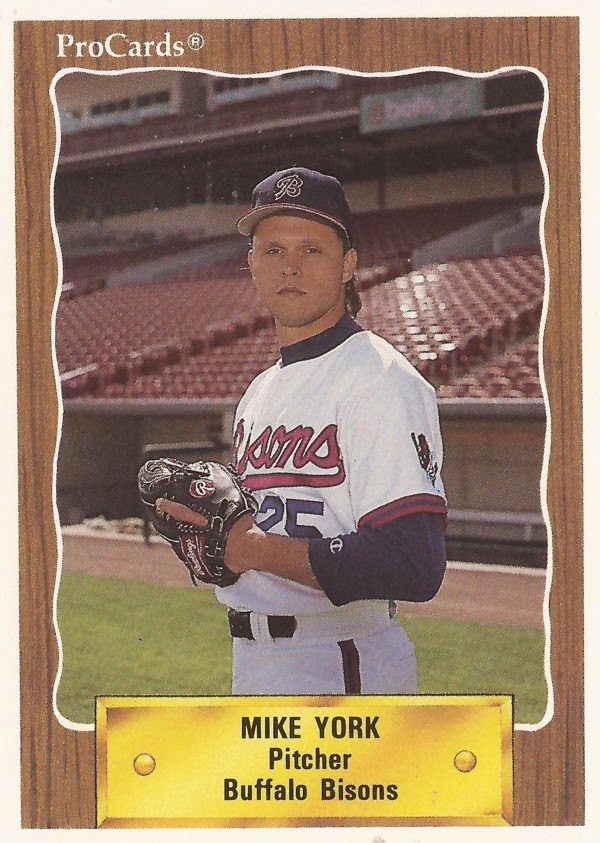 Mike York was so nervous, he wasn't sure if he would bounce the first pitch to the plate or throw it right to the backstop, he told The Associated Press.

The occasion was York's first big league appearance, in his eighth professional season.

"I think I threw a strike," York told The AP, recalling the reality of that first pitch, "and after that I was all right. I guess the nervousness flattened out my curve. I threw only about two good ones all night, but we won."

The Pirates won that night in August 1990. York did, too. But York won by just being there.

Four years earlier, on the last day of the 1986 season at single-A Gastonia, York had been released by the Tigers. It wasn't so much poor play on the field that led to the Tigers releasing York. It was poor decisions off it.

But, with the help of the Pirates organization, Alcoholics Anonymous and the counseling of a former pitcher who also was an alcoholic, York dried out, swore off alcohol and made it to the major leagues.

York's career began in 1982, taken by the Yankees in the 40th round of the draft, out of junior college.

He spent just one season, though, with the Yankees, nine appearances at short-season Oneonta. Then it was on to the White Sox in the rookie Gulf Coast League in 1984. Then the Tigers in 1985, at rookie Bristol.

All the while, though, York was drinking. Some nights, York drank a case of beer and a fifth of whiskey, he told The Beaver County Times in September 1990. Then came that day in Gastonia, when he was released from his third organization in four years.

"I walked into the clubhouse and my uniform wasn't hanging in my locker," York told The Times. "A cold chill went up my spine. It finally hit me that my career was over. I loved the game and thought I'd never play again. I thought I'd have to go work for a living."

A four-week alcohol binge later, the Pirates called. They knew of his troubles, but they still wanted to sign him. But he also had to deal with his drinking. The Pirates introduced York to Sam McDowell, former Indians pitcher and recovering alcoholic himself.

With McDowell's help through talks and some heated discussions, York straightened out. Or, as The Associated Press wrote in February 1988, "York realized a pitcher can't reach the top of the ninth when all he cared about was reaching the bottom of a fifth."

York later credited McDowell with saving his life. York didn't know where he'd be without him, he told The Los Angeles Times later.

"He's my best friend. He's my life-support system," York told The LA Times in 1992. "I remember when I got out of rehab, I must have called that man every day, at every hour of the night, for four straight months. I mean, I was calling him at 5 in the morning, midnight, it didn't matter. He was always there when I needed him."

He played 1990 at Buffalo, before injuries led to him being called up to Pittsburgh for that August game, the front end of a double header.

In that Aug. 17 start, York went seven innings, giving up six hits and no earned runs. He returned in September for three less-successful relief outings. Still, he was there.

He started 1991 back at Buffalo, before being traded to the Indians for Mitch Webster. York got into 14 outings with Cleveland, posting a 6.75 ERA. They were his final outings in the majors.

York signed with the Padres in 1992, before returning to the Pirates. He played the year at AAA. He's not credited with pitching in 1993 or 1994. But he returned in 1995 with the Blue Jays at AAA Syracuse.

He played 1996 in the independent Western League, then five final games in 1997 with the Ranges at AA Tulsa and AAA Oklahoma City, ending his career.

Back in 1990, before his major league debut, the one where he worked seven innings without giving up a run, York spoke with The Pittsburgh Post-Gazette.

He thanked the Pirates.

"I'll always be grateful to this organization," York told The Post-Gazette, "no matter if I'm here one more day or the next 20 years. They gave me a chance for a new start, not just in baseball, but in life."