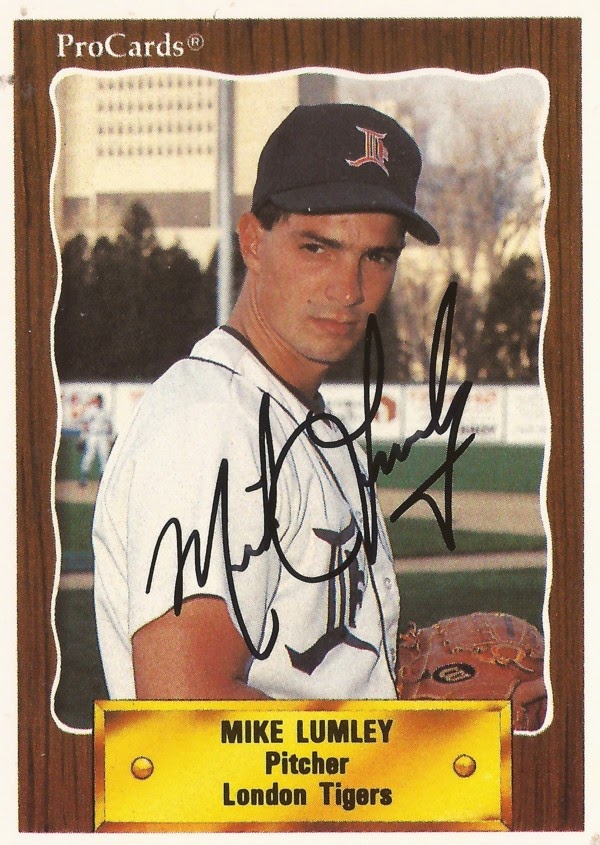 When draft day came in 1988, Mike Lumley pretty much knew his name would come up.

There was a good chance it would be the Reds. They'd talked to him pretty much weekly since a pair of tryout camps two years earlier. He'd also gone through all the tests with them.

A few other teams had inquired, too, he recalled. One team that didn't inquire, Lumley recalled, was Detroit.

"I had a lot of people calling," Lumley recalled to The Greatest 21 Days in August, "but not the Tigers. And then I got drafted by the Tigers. It was a bit of a surprise."

But it was also good, he recalled.

Lumley grew up in London, Ont., about midway between Detroit and Toronto. If he had a team, though, it was the Blue Jays - his grandparents lived in Toronto.

But, as Lumley attended Eastern Michigan University in Ypsilanti, Mich., it was the Tigers who became his adopted team.

"I fell in love with the Tigers being at Eastern," Lumley said.
It was the Tigers for whom Lumley played six seasons as a pro. It was with them that he made AAA and made the team's 40-man roster.

Lumley never made Detroit. But, the year after he signed with the club, the Tigers' AA team made a move - to Lumley's hometown of London. He got to play professionally in the town in which he grew up for one full season and parts of two more.

Lumley spoke to The Greatest 21 Days in August as his London Badgers 15U team competed in the Ontario Summer Games in Windsor.

Lumley has served as a coach with the Badgers youth program for more than 15 years. He also serves as head baseball coach at Western University in Ontario.

Lumley's playing career began that year in 1988 with his selection by the Tigers. Detroit actually selected him in the fifth round.
"It was awesome," Lumley said of his selection. "I wouldn't say it was the lifelong dream, but when you get into college you start to think about those things."

After he signed, Lumley said, all those thoughts were confirmed.

"Getting into minor league camp, playing baseball every day and everything revolves around that," Lumley added, "that's when it hits you: This is where I wanted to be."

Lumley was assigned to single-A Fayetteville. He got into 10 games, starting nine. He had a 2.91 ERA.

In that first year, Lumley learned the differences between college ball and the pros. The timing is different, he said. The game is a little different.

"In college ball, you're playing more small ball, hit-and-run, and more exciting baseball," Lumley said. "In pro ball, you sit back and there's still more development going on. They watch you."
Sparky Anderson, Lumley recalled, expected his minor league pitchers to have a certain amount of innings. And that's what pitchers got. "You had to grind your time," Lumley said.


That first year with the Tigers, the next steps up for Lumley were single-A Lakeland and AA Glens Falls. In his second year, Lumley moved up to Lakeland. But the next step after that changed.

In Lumley's second year, the Tigers' AA team moved - to London. He didn't make it home that season, but he did in 1990.

"It's kind of a great feeling, right?" Lumley said of getting to go home to play. "When you're on the bus all the time, it's nice to have a shoulder to lean on that you would never have to lean on when you're away."

In that first season at London, Lumley got 15 outings, two starts. He played the other half at Lakeland.

After another season at Lakeland, Lumley returned to London for all of 1992. In 55 relief outings that year, he picked up eight wins and had a 2.52 ERA.
Lumley was in familiar surroundings, but, he recalled, there was also a taxing side to playing at home. Being from London, he recalled his time was asked of more.

"Because you are from the city and more people would rather have you come in than somebody else, sometimes, just because of your involvement in the community prior to that point," Lumley said.

Beyond playing at home, Lumley also found himself two steps away from the majors.

And it wouldn't have been unheard of to be one big step away, he recalled.

"You know you're that much closer to going to the big leagues," Lumley said. "Especially with London. You're an hour and a half, two hours down the road. If Toledo's way out of town and they need somebody to just come up for a day, that's the club they'll go to. So you know you're close."

He was also that close while playing in London's Labatt Park, a park he knew well.

"You just have a great support system," Lumley said. "I think that's the biggest thing. It's nice to be in a familiar park you grew up and played in. It's nice to have those things."

Coming out of 1992, Lumley made the Tigers' 40-man roster. The next season, he made AAA Toledo. Then injury came, an injury that ultimately ended his playing career. (Go to Part 3)