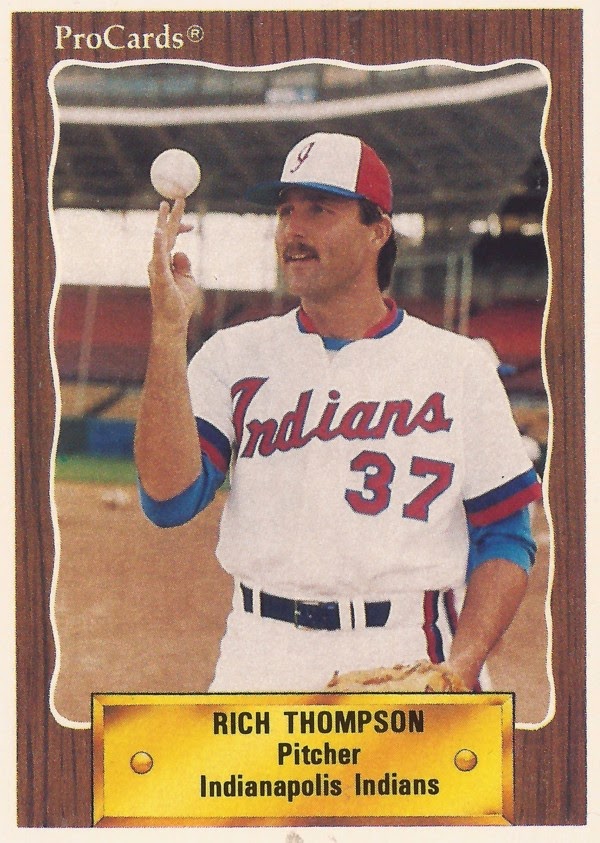 Rich Thompson picked up his first major league save in May 1985 for the Indians. After his previous three seasons where he seemed to stagnate, he was just happy to be there, he told The Associated Press.

"It's been a long time," Thompson told The AP after that outing. "I spent the last three years in Double-A ball and had very good years that seemed to go unnoticed. All I wanted was to pitch in Triple-A this year and show people that I'm not a Double-A pitcher."

Thompson finally did get noticed that year in 1985, and he spent almost the entire year in the majors with the Indians.

He went on to play in just two more major league seasons, though, 1989 and 1990 with the Expos. His last recorded playing time came in 1994 in independent ball.

Thompson, though, has worked in his time since to get noticed in a different field, the legal field.

Thompson's playing career began in 1980, taken by the Indians in the 8th round, out of Amherst College in Amherst, Mass.

He debuted at short-season Batavia, moving to single-A Waterloo in 1981, then AA Chattanooga in 1982.

Thompson, though, stayed at AA for the next two seasons, moving with the club to AA Buffalo for 1983 and 1984. He pitched largely in relief.

He started 1985 at AAA Maine, but soon got promoted to Cleveland, and stayed there the rest of the year.

With the Indians, Thompson got into 57 games, picking up five saves. His ERA, though, hit 6.30 in 80 innings pitched.

By July, he was trying a sidearm delivery, suggested to him by coach Don McMahon, according to The AP.

At the end of July, Thompson pitched in both ends of a double header. In the first half, he recorded just one out, giving up four earned runs. In the second half, though, he was called on again. This time, though, he picked up the save.

"I stunk so bad that first game, when (manager) Pat (Corrales) put me in the second game, I wanted to thank him right there for the chance," Thompson told The AP. "But I just decided to try to show him I deserved it."

Thompson moved to the Brewers system for 1986 in a trade, but got into just 22 outings at AAA Denver. He then played for three different organizations in 1987, moving to the Royals system full time for 1988.

For 1989, he moved to the Expos, the team that would bring him back to the majors. For Montreal that year, Thompson got into 19 games, starting one. He then got one final outing, one inning, for the Expos in 1990, but spent a month in the majors in total, ending his big league career.

Thompson played one more season in the minors in the Blue Jays and Rangers systems. He's then credited with one final brief appearance in independent ball, with Winnipeg in 1994, ending his career.

Thompson has since gone on to a new career, as an attorney. He went back to school, graduating with a law degree from Rutgers and now works as an attorney on Long Island. He's also done work as a sports agent.

In 2009, he returned to school again, this time to his alma mater Amherst College, to pitch in a reenactment of the first-ever college baseball game, which took place between Amherst and Williams College - using period rules, where the pitcher wasn't really a pitcher, but someone who put threw the ball exactly where the hitter wanted it.

The result for Thompson was expected, he gave up seven runs in three innings, according to The New York Times. Thompson joked to The Times, referencing his own playing days: "I was used to getting hit like that, though."