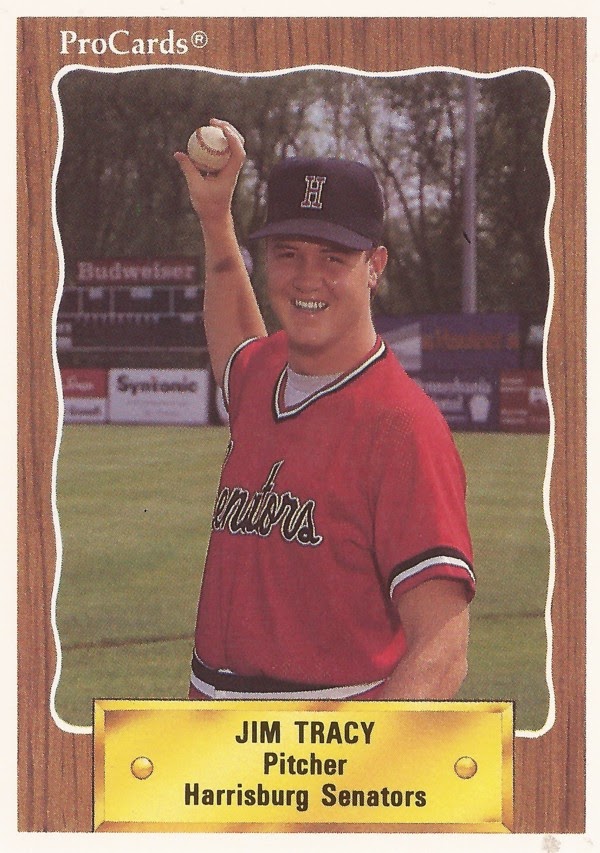 It was a career high in strikeouts for Jim Tracy on this July night in 1990, according to The Reading Eagle.

The Harrisburg Senator struck out 11 Albany Yankees in a 6-4 Harrisburg win.

It was a career high in his sixth professional season, helped by the fact that this was Tracy's first season as a full-time starter. Though he pitched well and he later made AAA, Tracy never made the majors.

Tracy's career began in 1985, taken by the Blue Jays in the fourth round of the draft out of North Shore Community College in Massachusetts.

He started in the rookie Gulf Coast League, going 3-2 in 17 games, three starts. He then moved to single-A Florence for 1986. In 36 relief outings, he had an ERA of 5.12 ERA. Tracy went two innings for a June save.

The Pirates came calling for 1989, taking Tracy in the minor league draft. He played that year and the next at AA Harrisburg. Turned starter in 1990, Tracy went 14-8, with a 3.00 ERA. By the end of August, Tracy had five complete games, his fifth was a one-hitter.

For 1991, Tracy split time between AA Carolina and AAA Buffalo. He had a 2.45 ERA in 16 outings at Carolina, a 5.17 ERA in 11 outings at Buffalo. In August for Carolina, Tracy pitched a four-hit, seven-inning complete game win.