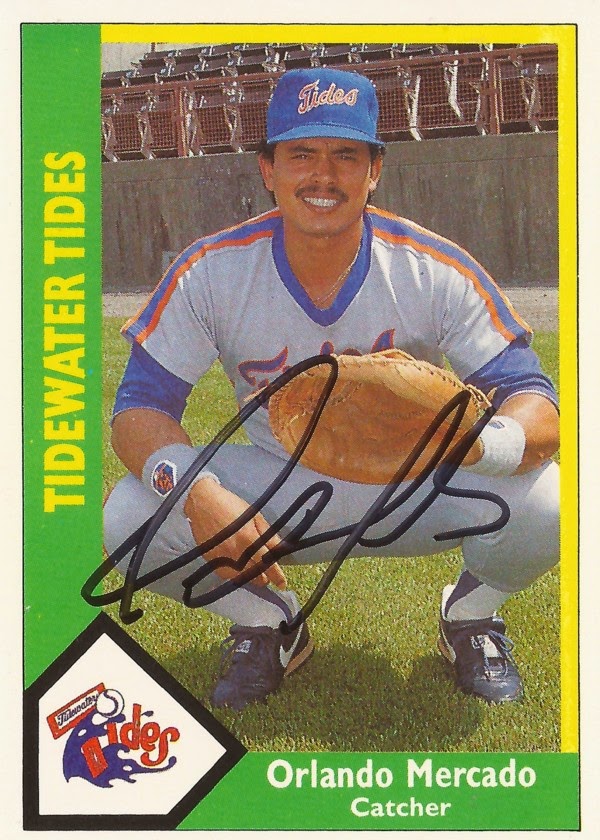 TRENTON, NJ - Orlando Mercado remembered falling behind 0-2, then laying off a series of sliders to get the count full.

This was Sept. 19, 1982, at Seattle's Kingdome, only Mercado's third game in the majors. He was facing Texas' Steve Comer, a three-quarters side-arm pitcher. The bases were loaded.

"It was 3-2 and he threw one of his sinkers right there," Mercado recalled to The Greatest 21 Days recently. "I hit it, a line-drive to left center and the ball went out."

Mercado didn't know it for sure until he was half-way around the bases. The second base umpire told him, Mercado recalled, telling the rookie he could slow down.

"I was excited," Mercado said.

Mercado, though, has hardly slowed down since. He went on to a playing career that spanned 17 seasons, eight of those with time in the majors. He then went on to a two-decade-long coaching career that continues in 2014 as Mercado serves as a coach for the AA Trenton Thunder.

Mercado spoke with The Greatest 21 Days before a recent game at Trenton's Arm & Hammer Park, where Mercado's Thunder were taking on the New Hampshire Fisher Cats.

Mercado covered his youth in Puerto Rico, coming from poor beginnings to get signed at age 16. From there, he rose through the minors, learning the language along the way. Soon, he was in the majors hitting that grand slam.

Much of his time since his playing days ended was with the Angels. In 2002, Mercado served as the Angels bullpen catcher in Anaheim. The catcher who was once a poor kid from Puerto Rico was there for the World Series championship, and for the club's trip to the White House. He later became the team's bullpen coach.

For 2014, he's in his first season with his new organization, the Yankees, serving as a coach at AA Trenton.

Mercado was born in Arecibo, Puerto Rico. He recalled being introduced to the game at the age of 8. Soon, he was playing all the baseball he could, Little League, Mickey Mantle, Sandy Koufax.

He started off as an infielder and a catcher. He recalled playing double-headers on Saturdays and Sundays, playing the first game in the infield and the second at catcher.

Mercado seemed to have a knack for throwing runners out, so, when he went to a pro tryout at age 16, he went as a catcher. It also helped that there were fewer catchers at the tryout than infielders. He soon signed his first pro contract with the Mariners.
Mercado recalled watching the Game of the Week on his family's old black and white television, seeing the Reds, the Pirates, Dodgers and the Yankees. Now, he was hopefully on his way to be playing in the majors himself.

Before he could make it to the majors, though, he had to learn English. He took an English class and his English improved.

For Mercado, the language was as important as anything, he recalled.

"My position as catcher, I had to communicate with everybody, so it was No. 1 for me," he said.

Mercado started in rookie ball, but didn't get into a game. He then got onto the field at short-season Bellingham in 1978. He made AA Lynn in 1980, then AAA Spokane in 1981.

Mercado got the news as September came, after a game.
"The manager called me in the office and said, 'hey, congratulations, you're going to the big leagues,'" Mercado recalled. "So I was excited because that's what you work for."

Mercado debuted Sept. 13 as a late-inning defensive replacement. He then got his first at bat five days later. The Sept. 19 game his first start.

On the mound for Seattle was a fellow Puerto Rican, Edwin Nunez. In Mercado's account of the game, he first pointed to what he and Nunez accomplished, before what he accomplished on his own.

Mercado helped make that win happen, sealing the game with his grand slam in the fifth, part of a Mariners eight-run explosion Mercado's grand slam proved the difference in the Mariners' 9-7 win.

From there, Mercado went on to his eight-season major league career, then to his ongoing career as a coach.