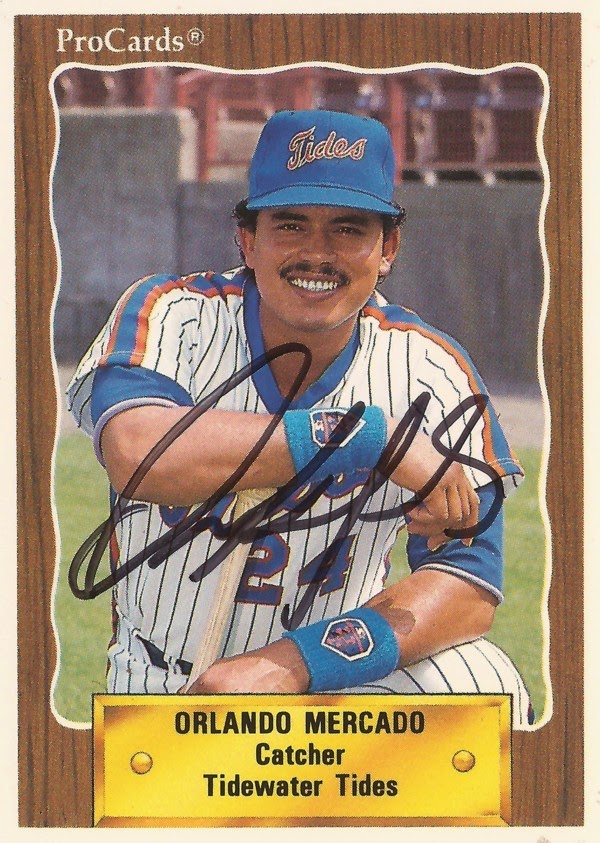 Orlando Mercado was there in 2002 when his Angels won the World Series. He was the team's bullpen catcher.

He was also there later, when the championship Anaheim squad visited the White House.

Looking back on his career in the game, it was that visit, where he even had a meal, that was his biggest moment.

That visit came in a baseball career for Mercado that has no spanned 35 years in the game. It was a career that saw 17 professional seasons as a player, eight of those with time in the bigs. It's also seen two decades of time as a coach, most of that spent with the Angels organization and more recently with the Yankees..

Mercado spoke with The Greatest 21 Days before a recent game at Trenton's Arm & Hammer Park, where Mercado's Thunder were taking on the New Hampshire Fisher Cats.
Mercado covered his youth in Puerto Rico, his rise through the minors and his arrival in the majors, an arrival punctuated by a first-hit grand slam.

Much of his time since his playing days ended has been spent as a coach in the Angels organization, including several years with the big club in Anaheim. For 2014, he's in his first season with his new organization, the Yankees, serving as a coach at AA Trenton.

Mercado first made the majors as a player, in September 1982. His first hit came in his third appearance. It was a grand slam. He was the first player to hit a grand slam for his first major league hit.

The bat he used made its way to another place of honor, though Mercado hasn't been there to see it. It was collected by the baseball Hall of Fame. Others have told him they've seen it there, he said. "I've never been to Cooperstown to see my bat," he said, "but someday I will."

"From there, I started jumping to different teams because I wanted an opportunity," Mercado said.

From 1986 to 1990, he played for the Rangers, Tigers, Dodgers, Athletics, Twins, Mets and Expos. His time with Oakland came in 1988, getting into 19 games in the Athletics' American League championship year.

His final big league time came in 1990, with the Expos. His final professional game, though, didn't come until 1994. His final time came with 12 games as a player coach at AAA Vancouver for the Angels.

"I had to work hard, really hard to stay in the game," Mercado said. "I thank God that I played for 17-straight years."

Mercado then continued with the Angels as a coach. He coached at AA Midland in 1997, then rookie Butte. In 2000, he arrived back in the majors with Anaheim as bullpen catcher.

For 2003, Mercado moved to the job of bullpen coach for the Angels. He also followed Angels manager Mike Scioscia to the 2003 All-Star game. He stayed in that job through 2010, when he became the Angels minor league catching coordinator.

For 2014, he's with the AA Thunder, coaching for the Yankees affiliate.

When he was with the Angels, Mercado said players generally knew his history because he'd been with the organization so long. With the Yankees, there isn't that history.

Wherever he's been, though, Mercado said his goals have been the same: "to be a mentor, to be a teacher, to help these kids who come into the country."

"So my goal is to help these kids so their dreams can come true," Mercado said.

He's also long realized that each player is different. Some guys don't understand it right away, they take longer. "But I come here with the attitude to work, to try to be the best teacher every day," Mercado said, "and to work and to get better every day."

The Yankees, though, offer their minor league coaches a lot of resources, he added. Still, there's much observation that has to take place, both in-game and on video, he said.

Throughout his career, Mercado has also amassed four rings, one for work in the minors and the other three for work in the majors.
Mercado was part of the 1987 Pacific Coast League champion Albuquerque Dukes. He also played 19 regular season games for the 1988 AL champion Athletics. Then there are his 2002 World Series championship ring an 2003 All-Star game ring.

"Everybody is dreaming to be on that stage," Mercado said of his most important ring, his 2002 championship ring. "I never did as a player, but I did as a coach. I got my ring. A lot of people play a lot of years and don't have a ring."

"That's everybody's dream," Mercado said. "At least I can say I was there on that stage. I know what it takes, plus I have my ring, too."

Mercado said he's continued in the game so long, now 37 years, because his passion for the game continues.

"With an attitude of work, work, work, everyday," Mercado continued, "to get somebody better so somewhere down the line they can say, 'that guy Orlando Mercado helped me make it to the big leagues."