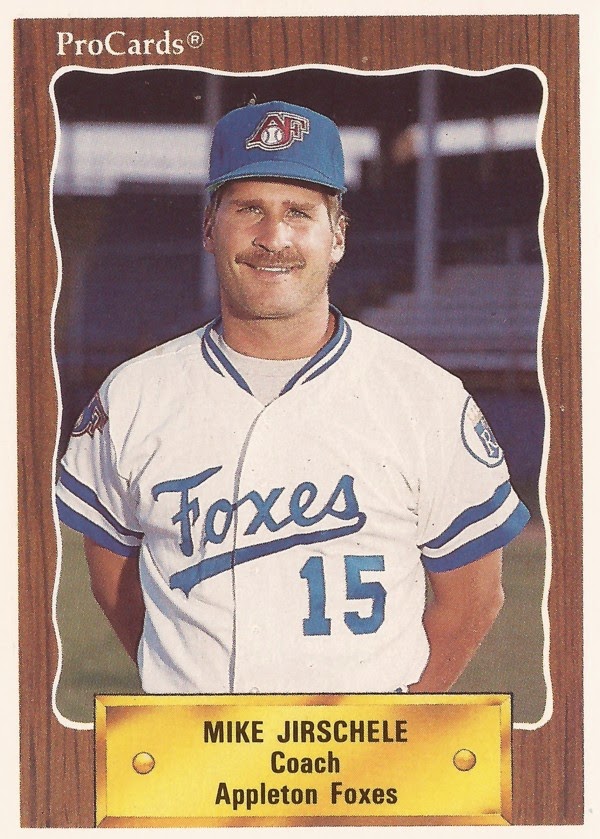 Mike Jirschele had a big choice to make coming out of high school: Take a scholarship to Wisconsin or turn pro, according to The Milwaukee Journal.

Jirschele chose to turn pro, starting a career that he hoped would take him to the majors.

"I signed the contract here at home today," Jirschele told The Journal after signing. "It's my mom's birthday. So that was really nice."

Jirschele eventually did make the majors - but not until 37 years later.

Jirschele got a dozen seasons as a player. He made it to AAA, but never made the bigs. He then has gone on to a long career as a coach. He's spent much of that career in the minors, including a dozen seasons managing AAA Omaha.

Then, for 2014, Jirschele was named by the Royals as a major league coach.

"I've been in the minor leagues a long time," Jirschele told The Kansas City Star in October 2013 after the big announcement. "I'm just very fortunate and happy to get the opportunity to help the big-league staff."

Jirschle's career in baseball began in 1977, taken by the Rangers in the fifth round of the draft out of Clintonville High School in Wisconsin.

Jirschle chose the pros over college, but his signing was delayed until a series of medical tests were done, The Journal wrote. That's because three of Jirschele's brothers in his close family were afflicted with a devastating form of Muscular Dystrophy.

Soon, though, he was on the field. He started in the rookie Gulf Coast League. He made single-A Asheville in 1978, then AA Tulsa in 1981.

Jirschle continued with the Rangers, through 1987. He then moved to the Royals and AAA Omaha for 1988. His final full season came in 1989, between Omaha and AA Memphis.

Jirschle then started his coaching career. He served as hitting coach at single-A Appleton for 1990 and 1991. He got his first managerial job in 1992 in the Gulf Coast League.

In 1995, he returned to Omaha, this time as manager. In all, he'd manage Omaha for 14 seasons. In between, Jirschle served as a Royals minor league instructor.

In 2007, Jirschle managed Thad Markray as Markray tried to take that last step to the majors. Jirschle had words of encouragement for Markray, according to The Shreveport Times.

"As long as you have that uniform on, you have a shot," Jirschele told The Times. "(Markray) just needs to continue to pitch and get the opportunities, and he may get that chance some day."

Markray never got that chance. Jirschle kept his uniform on for 37 years. He finally got his shot in 2014.

In March 2014, ESPN The Magazine chronicled Jirschle's long road to Kansas City. The article traced Jirschle's professional story, as well as his family story. His family story included that of his three brothers, all who fought their diseases long, with the help of family.

There was also Jirschle's wife, Sheri and their children.