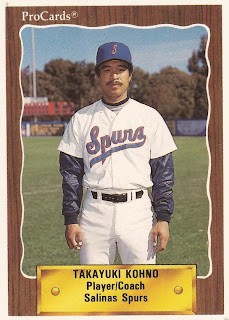 Salinas Spurs manager Hide Koga explained the rigorous Japanese training schedule. It was a regiment that Koga didn't mandate, but his coach Takayuki Kono offered it, according to The Chicago Sun-Times.

"After the game and dinner, he would take a handful of players to swing bats outside the hotel under streetlights," Koga told The Sun-Times of Kono.

Those who took Kono up on the practice got to learn from a veteran of Nippon Professional Baseball. The previous year, Kono played his final game in NPB, his 15th season under the lights in Japan's top league.

He then went with Koga, and a contingent of Japanese prospects, to California and Salinas.

Kono's career in baseball began in 1973, taken by the Nankai Hawks in the third round of the draft, out of Yawatahama Technical High School in Japan. Kono's name has also been spelled Takayuki Kohno. The Japanese form of his name is 河埜敬幸. Kono's brother also played in NPB.

With the Hawks, Kono made his first appearance in NPB in 1975, getting nine games with the club. He then returned to the Hawks each year through 1989, getting into more than 100 games in 12 of those seasons.

Along the way, Kono lead the league in plate appearances and at bats twice, in 1982 and 1984. He also led the league in singles both of those years, tying for the lead in 1984.

In October 1988, Kono had a game-winner, a sacrifice fly in the bottom of the 10th to beat the Seibu Lions, according to The Associated Press. He then played his final NPB game in 1989.

For 1990, Kono moved to the United States with Koga to play and coach with Salinas. Kono stayed with Salinas for three seasons, getting into at least one game each year. He also coached.