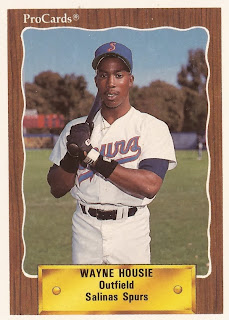 The mechanics of Wayne Housie's call to Boston in September 1991 involved an injury to the Red Sox' Mike Greenwell and tracking Housie down in California, where he'd started his off-season work in a department store, according to The Los Angeles Times.

For Housie, how he got there didn't seem to matter.

"I don't care. I'm here," Housie told The Times. "That's what it's all about. Two weeks ago I was home, my season over. Now I'm in a pennant race. If I have to sit and watch, that's just fine."

Housie made his major league debut in his sixth season as a pro, a season after being released by the team that drafted him and having to sign with and independent single-A club.

Before his career was out, Housie would return to the majors one more time, with the Mets, getting into a total of 29 major league games in his career.

Housie's professional career began in 1986, taken by the Tigers in the 8th round of the January draft, out of Riverside Community College in California.

With the Tigers, Housie started at single-A Gastonia, hitting .259 and stealing 38 bases over 90 games. He moved to single-A Lakeland for 1987, swiping 26 bases and hitting .258. At Lakeland, Housie also had a 13-game hitting streak.

Housie played 1988 between Lakeland and AA Glens Falls. At Glens Falls, his average dropped to .188. But he hit a home run for Glens Falls in a May game and tripled and scored in another one. In July, back at Lakeland, Housie hit a bases-clearing triple.

Housie returned to AA with the Tigers in 1989, at London. But it was his last year with the Tigers. He signed with independent Salinas of the California League to start 1990. After hitting .270 there, with 27 stolen bases, he signed with the Red Sox and played out the year at AA New Britain.

He then played most of 1991 at New Britain, with 21 games at AAA Pawtucket. Then came his September call up. With the Red Sox in Boston, Housie got into 11 games, with 10 plate appearances. He picked up two hits and one stolen base.

Housie returned to the minors for 1992, playing the entire year at Pawtucket. After signing with the Mets for 1993, Housie made his return to the majors. He got into 18 games that year, hitting just .188.